l think as a parent most of us enjoy watching our children grow and develop their own unique personalities....each child being different from ourselves in many ways, and expressing their style and taste as only THEY can ....so it was a lot of fun to fly up and be with our daughter Bree and her partner Rhys, to stay with them and see the house they recently purchased and join in all their enthusiastic plans for future renovations.
Their house is close to the beach and in a much warmer climate than ours....not quite sub tropical but ALMOST, so the garden has many plants l recognised by sight but had no clue as to their names....a few l DID were palms, frangipani's and philodendrons.
Being an older home (1940's), there's LOTS to be done, hubby managed to sort out a few of the more pressing drainage problems and we all attacked the garden with gusto...(ok a chainsaw:-). 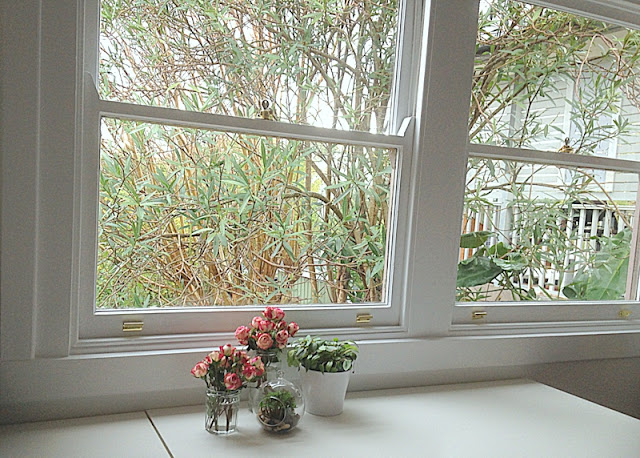 The oleander outside this window had to go, as they're highly poisonous. Bit of a shame though....it looks so pretty.
Two rooms have been completed so far, the study and the main bedroom, eventually the entire house will be painted white. 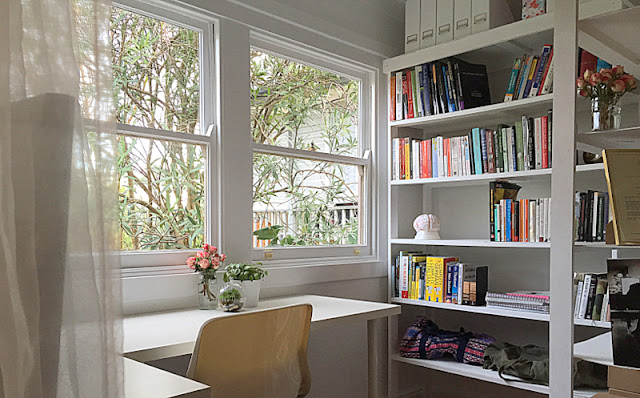 This is the study completed.... After a week of sanding, scraping and painting and the replacement of locks and lifters, the windows are now fully functional. The room is divided by central shelving, and another desk sits to the other side of it. 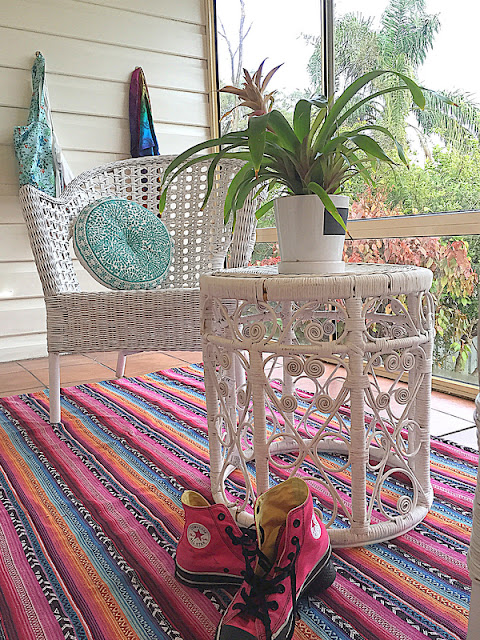 The floor tiles in the sunroom will eventually be painted white but in the meantime Bree and l found this tropical bo-ho fabric at Spotlight and created the floor rug by fusing backing to it and then sewing it all together. Hopefully l have some fringing amongst my stash that l can send up to her which she'll sew onto each end. 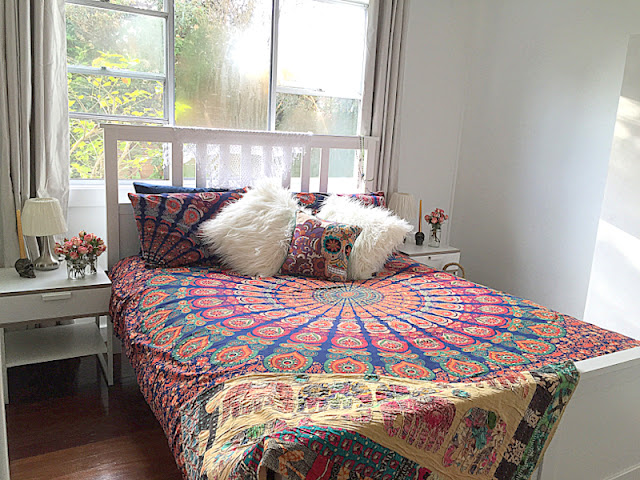 This is the master bedroom finished.... the walls and ceiling were painted white....l love her bold choice of doona cover, the skull cushion matches perfectly and was a pressie from her brother. 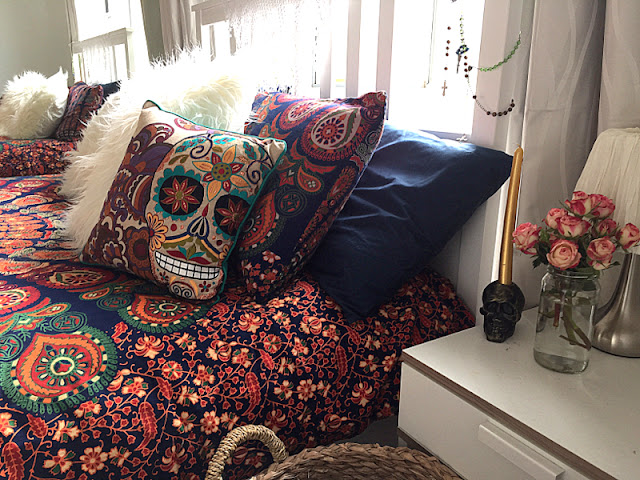 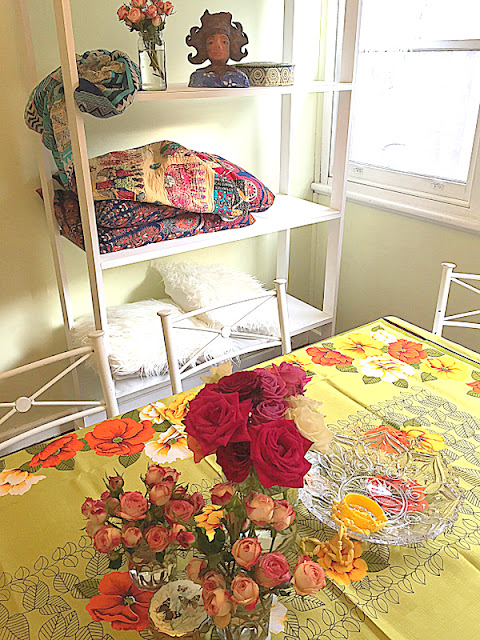 This is the dining room....the pottery bust is one Bree made at school, which even then shows signs of the tribal bo-ho look she's into...The head dress is a bit broken, which l guess is unsurprising after travelling with her the last ten years and living in at least ten different locations:-)
The shelving usually houses Bree's multi-coloured glass collection but for now is in boxes until this room's completed. 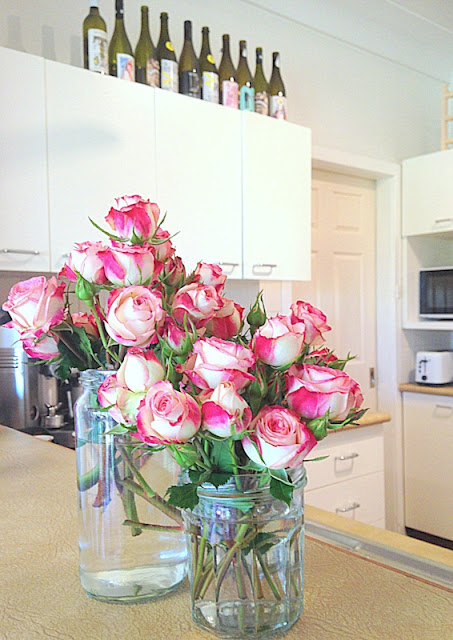 A  glimpse of her small but functional kitchen...only JUST she says... since they installed a dishwasher:-) 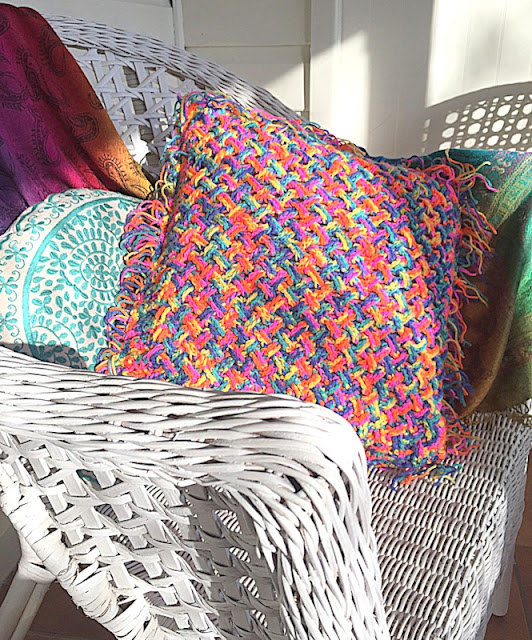 Thought you might like to see the awesome cushion Bree crocheted...apparently learnt the weave stitch from a utube video. Wonder if she'd make me one!! 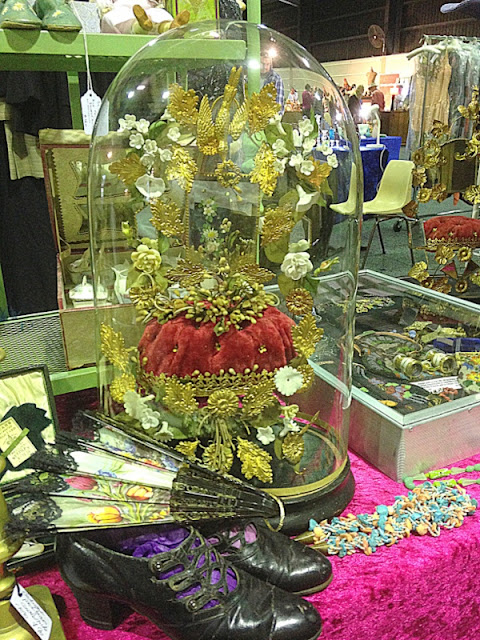 We took a little time for some R&R, and found ourselves an antique fair.
Loved this antique wedding dome.


Wishing you all a warm and sunshiny rest of your week.....thanks so much for dropping by.

Posted by vintageandart at 9:45 AM
Email ThisBlogThis!Share to TwitterShare to FacebookShare to Pinterest