Well we've done it !!!  with a week off work we've had almost enough time to sort,organise and cart nearly everything from here to the new digs, (the big stuff is on it's way as l write) and all is coming along well. We started on some of the painting but ran out of  time to finish and share the first makeover.  Most of the cupboards are contacted in "lovely" 70's daisies, so an update is also well on the way .... using 2011 marbled contact.. hehe!! 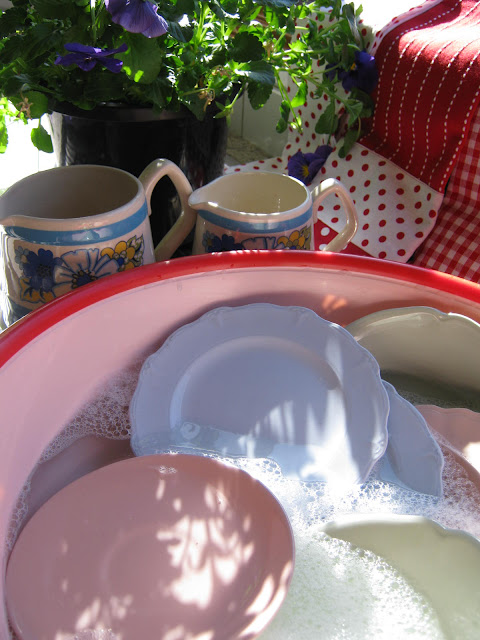 Strangely for Winter the sun was streaming through the kitchen window so took some pics to share with you. 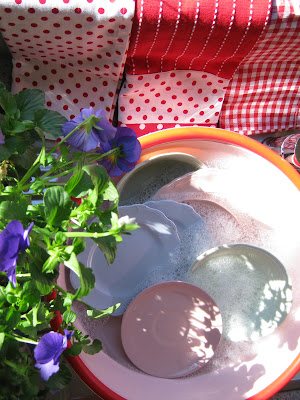 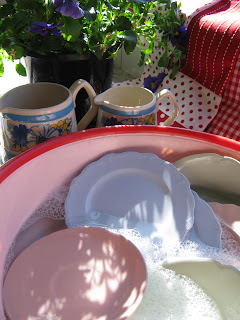 This week's post was inspired by a "dishes in the sink pic" l found on a Selina Lake post ( link on my sidebar), so when l spotted this gorgeous vintage plastic dish in an opshop earlier in the week l  knew it'd be perfect for something similar. 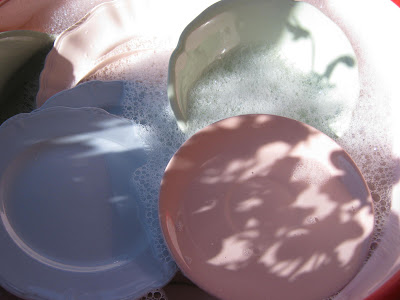 Many years ago l spotted a pic in a magazine of a kitchen dresser filled with all shades of plain pastel china, which looked stunning and inspired me to collect some pieces for my own little display. l don't quite have enough bowls YET!! but maybe by Spring.  l've only shown the pink, blue and green cos even though l also have lemon the colour clashed with the dish. 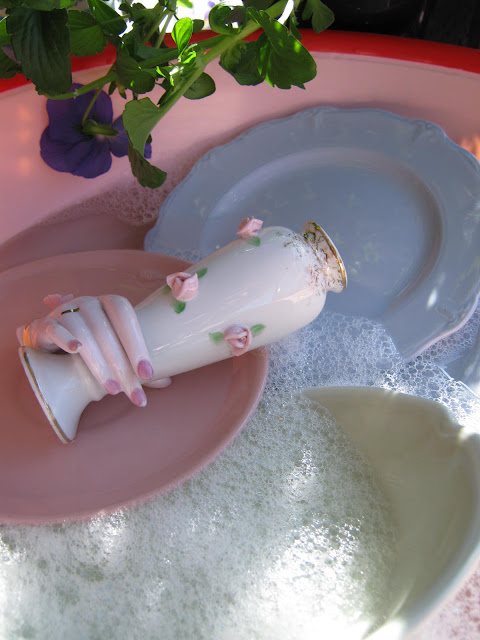 This pretty hand vase was a lucky dollar find at the opshop. 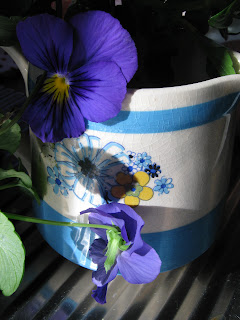 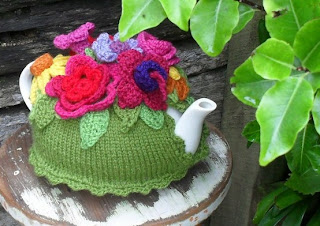 Right. crochethealingandraymond via pinterest. Would love to knit something like that!!
Left. This Japanese jug which is probably 60's, is one of two l have but was most likely one of a trio. 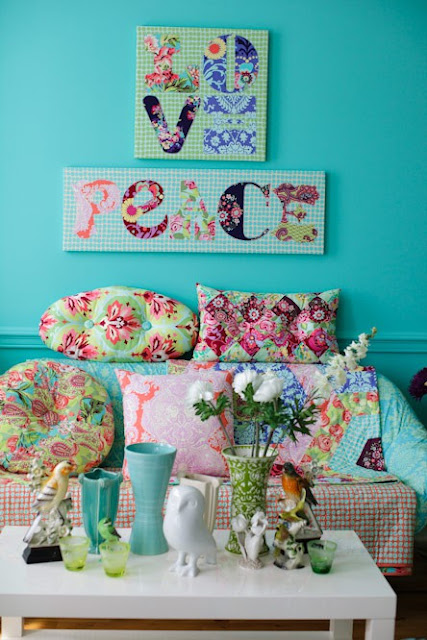 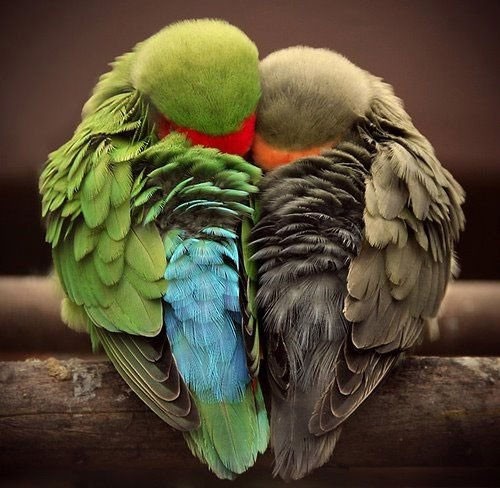 Enjoy your weekend, here's hoping for some shining of the sun.

Til next time.
Posted by vintageandart at 10:46 AM 3 comments:
Email ThisBlogThis!Share to TwitterShare to FacebookShare to Pinterest

We used to live in a teeny house and coming here we found ourselves  a bit light on for furniture. Something we really needed was a lounge suite, so when my elderly Aunt who lives in Melbourne was downsizing her lounge suite she kindly offered this one to us. We hired a small truck, risking life and limb driving through Melbourne to pick it up.......which wasn't easy cos it weighs a ton. Since it doesn't have big puffy seats and armrests hubby was less than impressed, and l admit it's not something l would pick out ... but it was something to sit on. l'd always had the idea that l'd paint it, but Aunt had polished and treasured that carved wood so l was a bit hesitant to let lose with the paintbrush, and what if she caught the train and visited and saw it... Lordy l did not want that face etched in my brain...
Any way l got over it  and here it is. Also she's way older now and unlikely to visit. Now if the suite was an antique l most likely wouldn't have painted it but since it's an 80's repro l don't feel too badly. 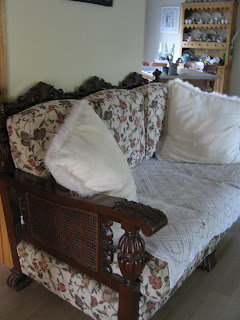 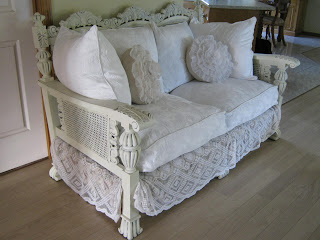 As you can see the cushions in the after pic are not the original. l was lucky enough to come across another couch which had all these feather filled cushions on it. l payed the $150 they were asking for the couch and l only took the cushions. They were nice enough to get rid of the couch frame for me. When l got home they fitted perfectly..yay!!
It took ages to sand and l knew l had to do a pretty thorough job as it had been polished fanatically (not by me). To paint it l based it in grip lock primer and then 2-3 coats of a warm white. It was a colour l concocted myself, so no name. 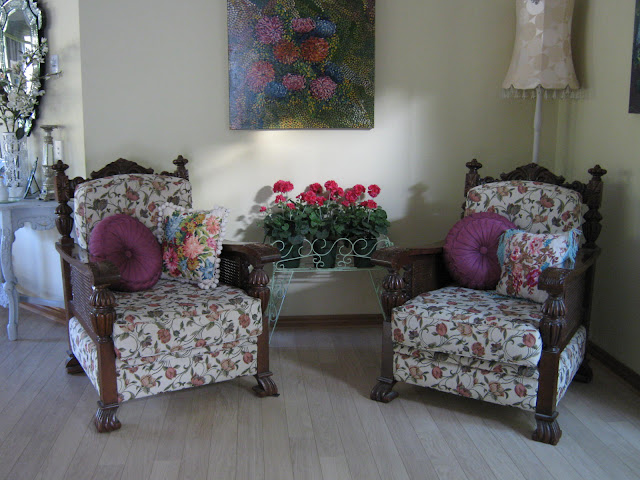 Although it looks ok in this pic l just think it's a bit dark and old fashioned. 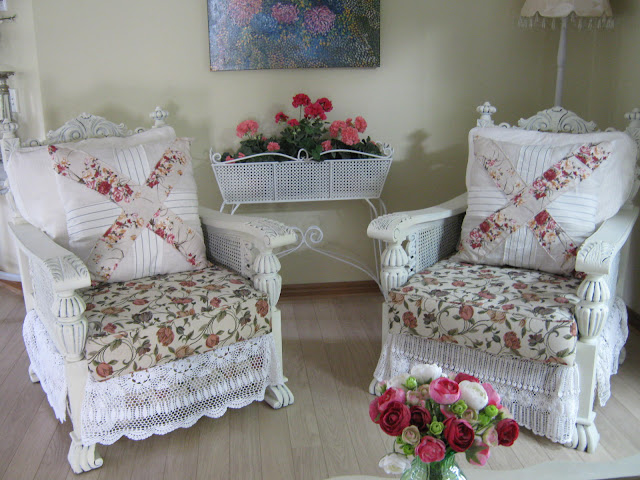 l've done away with the back cushions and made my own softer ones. l put lace around the bottoms since l'm so not a fan of the floral. l made the front cushions ages ago and they seem to match in ok. 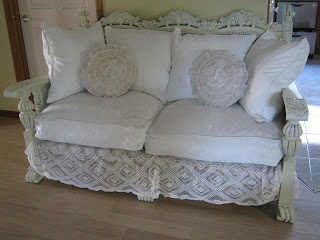 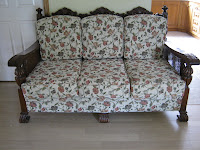 Drab to fab.....what do you think?? (Sorry about the fuzzy before pic). 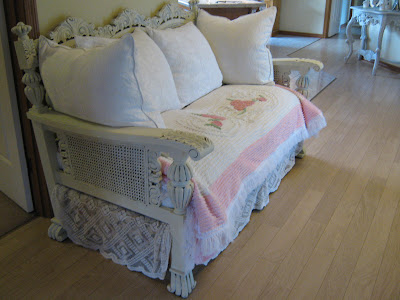 Even though all the covers come off and can be washed it's just so cosy and comfy with this old chenille bedspread thrown over it. 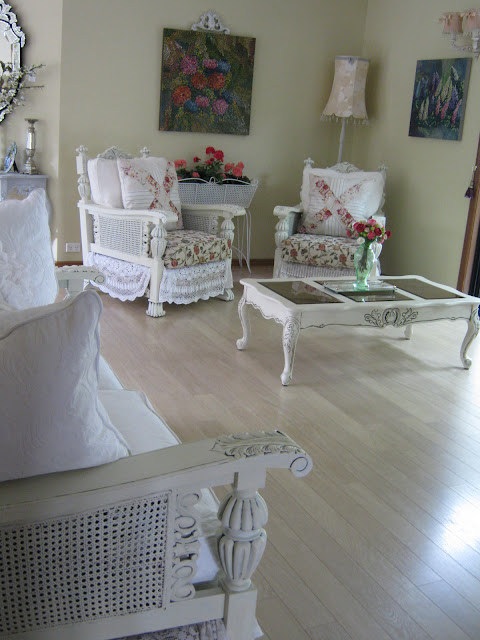 This is how it sits in the family room. 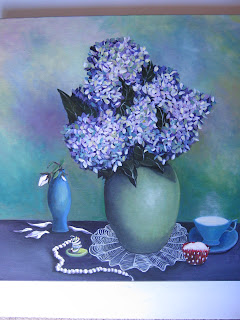 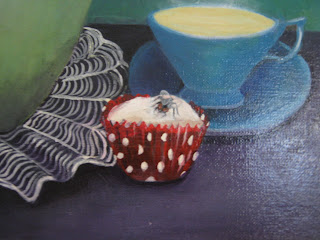 l mentioned that l'd painted a fly on the cupcake in this painting and thought you might like to see it. Not very appetising.....either the fly or the cake...but a bit of fun. 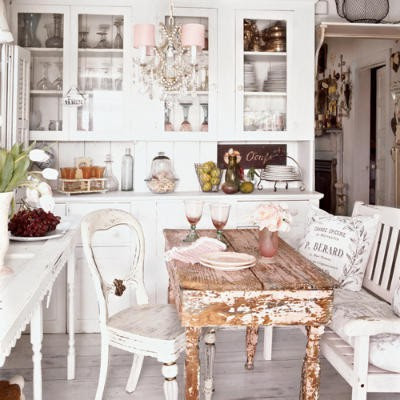 l hope to start the kitchen setting soon so have been looking around for inspiration. Love this table and chairs. 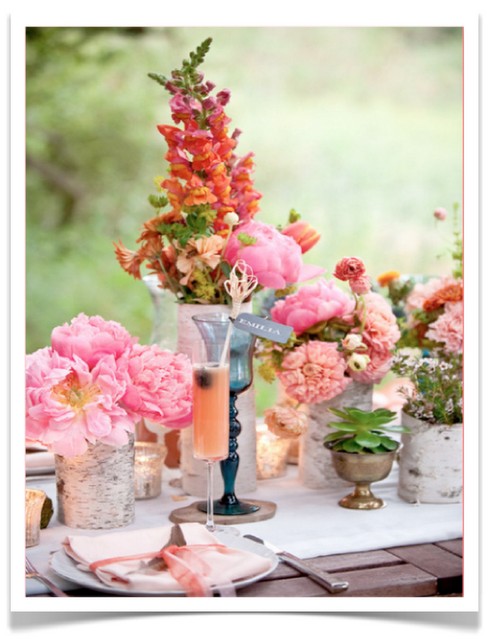 
l can't believe l'm saying this again already...but have yourselves a fantastic weekend.

Posted by vintageandart at 9:50 AM 4 comments:
Email ThisBlogThis!Share to TwitterShare to FacebookShare to Pinterest
Newer Posts Older Posts Home
Subscribe to: Posts (Atom)