Here l was strolling past the book shop in town....when l spied Rachel Ashwell's latest book in the window.....now usually here in Oz it seems we have to wait 'til EVERY other country in the world has their copies before it hits OUR shores..... but NO...there it was, in all it's shrink wrapped glory, so l pulled my PRIZE from the window and couldn't wait to get it home for a squiz (okay l DID pay for it first :-).......For me.... it's her best YET!! 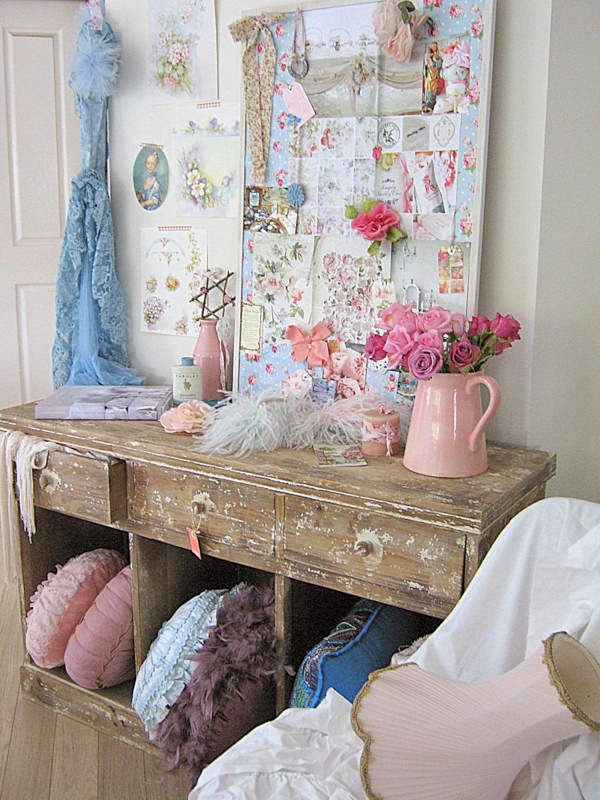 ﻿
Any- hoo.....l photocopied some of my most FAVOURITE pages and pinned them to my inspiration board and took some pics....just for YOU:-)
Since the very ESSENCE of Rachel's style is all about vintage....lt got me to thinking how best YOU could find great value vintage, and garage sales are certainly worth considering.....NOT saying l'm an expert in this area since l've only been doing garage sales for a few months but l have discovered a COUPLE of tips you might find useful. 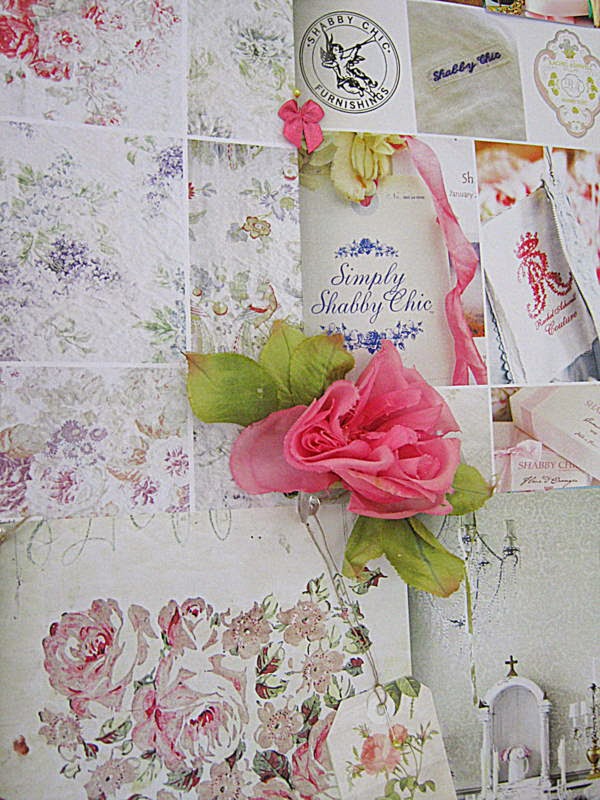 1. Start Early......If you're able to map out a plan of action the night before... then that's the ideal to be where you WANT to be when the sale starts, since the VERY BEST buys are snapped up in the first 10-15 minutes.... Though plenty do, l wouldn't advise getting there really early and banging on doors, you MIGHT get the best deals, but l think (deservingly) you'd cop a fair amount of abuse as well. 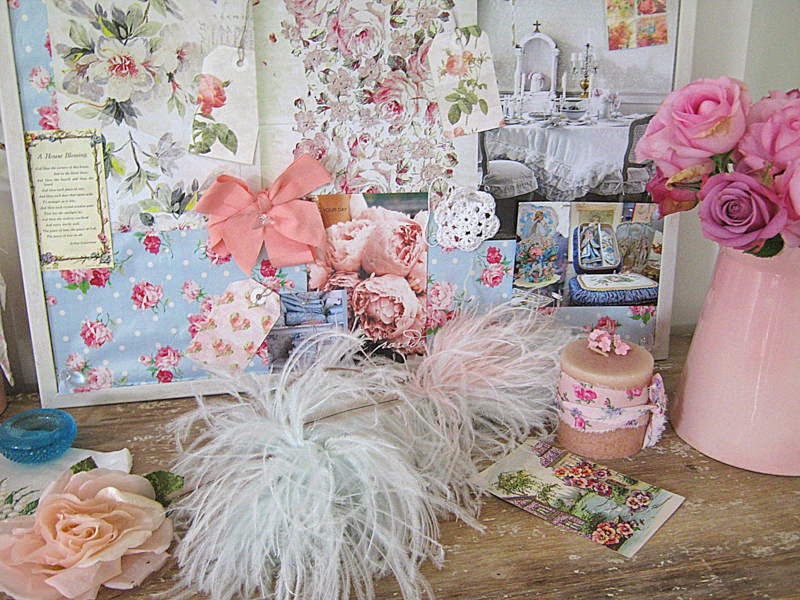 2. Select. which sale you visit first. People will often advertise some of what they're selling so you can guesstimate which one is more likely to have what you're after. It's a good idea to visit group, close together sales, or car boot sales first.....where there's more variety for you to pick through. Lots of people like to visit the more affluent suburbs first where they believe the quality of finds is better, though usually l find the prices there much higher as well. 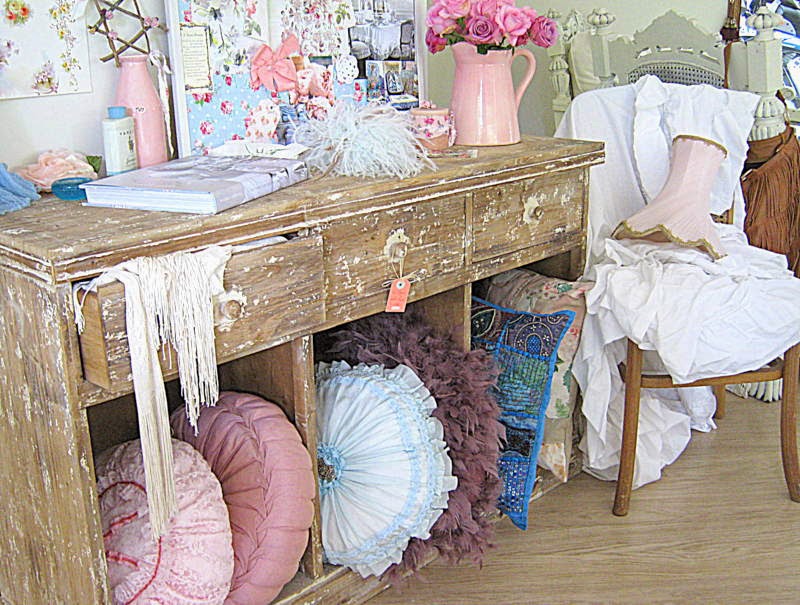 3 Bundle....If you find a garage sale that has lots of things you like, start a pile near where the seller/s are and let them know, so they don't sell your stash off to someone else:-) If things are priced (if not make up your own) add up the numbers as you go (at least roughly) so you know what to offer when you're done. If things are cheap l'll not worry too much about haggling, but for many that's half the fun.... it's each to their own isn't it. If things seem a bit spendy then l might haggle a bit..... of course play FAIR and ALWAYS carry lots of small change and notes...it's not nice to haggle for a fiver and hand over a fifty. 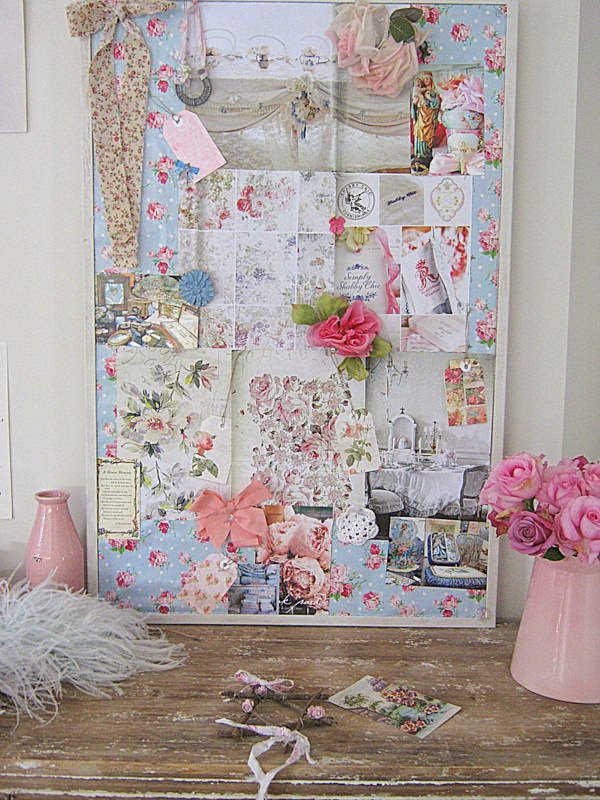 4. Check Boundaries...It might seem obvious but l've missed quite a few bargains simply because l was unclear EXACTLY where the sale began and finished.....it sometimes goes up the sides of sheds, or both sides of a driveway, it may even be in all/some rooms of a house, or (in one case) even into the house next door....Just check with the seller when you arrive so's you know.... 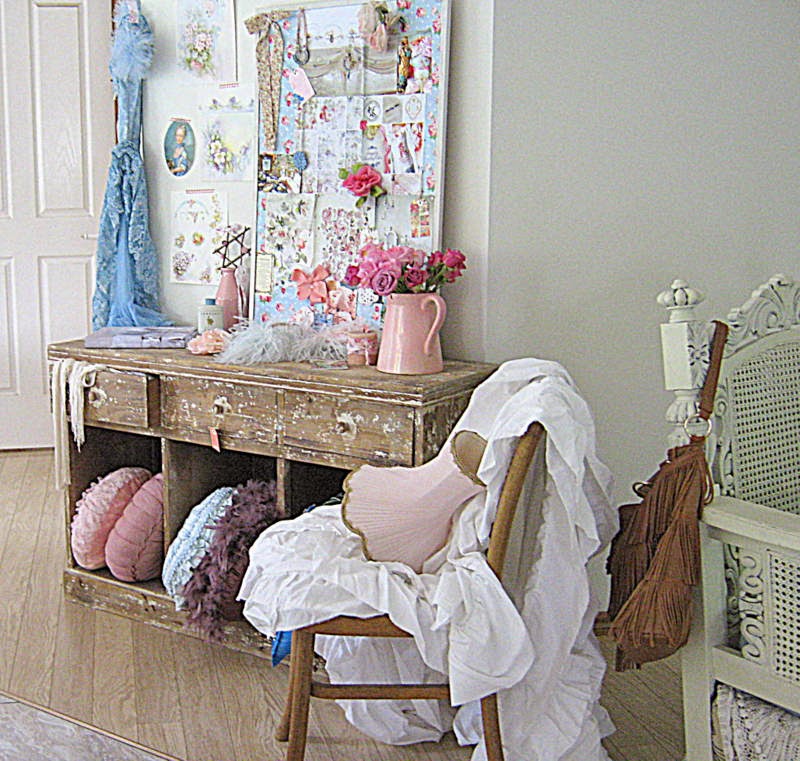 5. Transport.....if you're able to take a ute or a trailer that's a great bargaining tool to buy larger items, that way not only can you offer CASH but you have the means to get that great hulking piece of furniture OUT of their house. 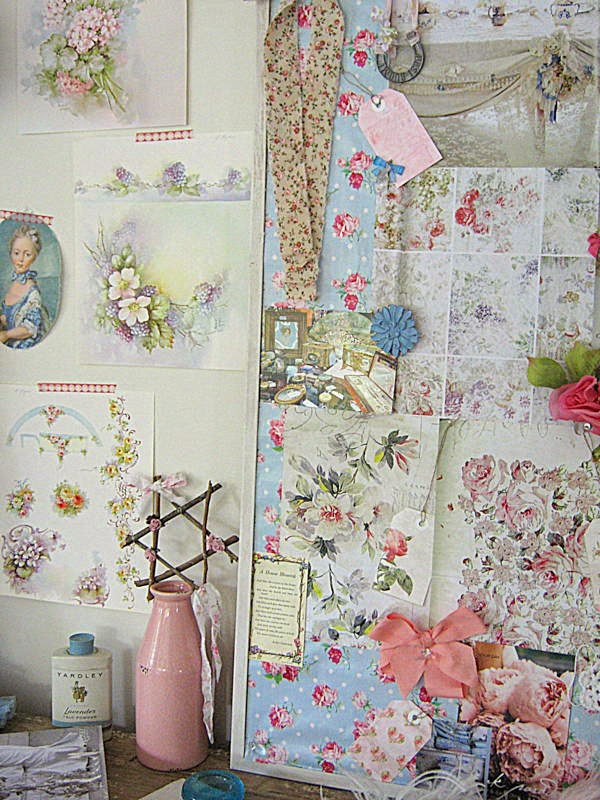 6. Phone....your phone can be used to not only help you navigate your way around the sales.... but also to check out the price of something you don't know the value of, a useful trick (especially) if you're looking to sell the item on...of course it's better if we have an idea off the top of our heads, since it takes time to run off and google... but we can't always know everything about EVERYTHING can we....make sure when buying furniture to check all drawers (take them out) backs, doors and feet...you don't want to take home any hitchhiking BUGS. 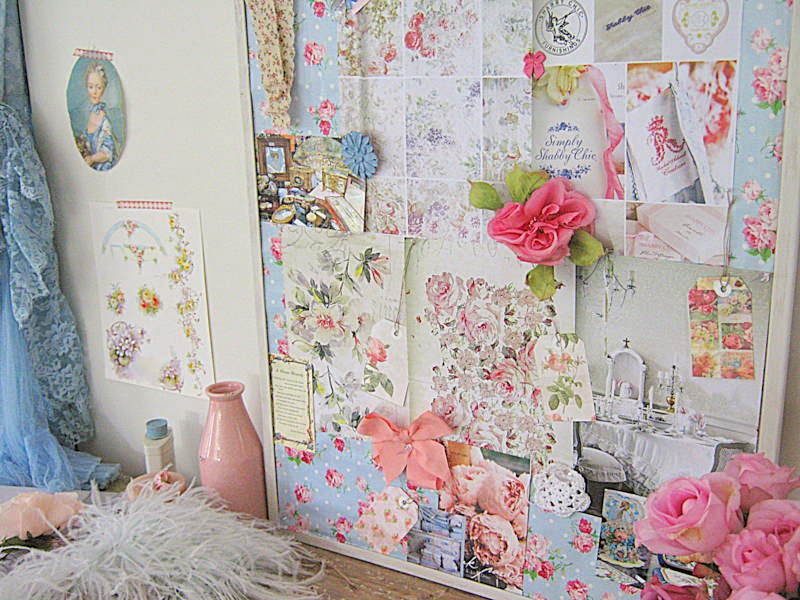 7. Set Limits....lt's a good idea to stick a to budget, HARD l know but otherwise it's all too easy to get carried away when the choices are many.....If l'm buying to stock my stall l steer clear of anything broken, chipped, cracked, or damaged..... in my experience people simply DON'T buy them. 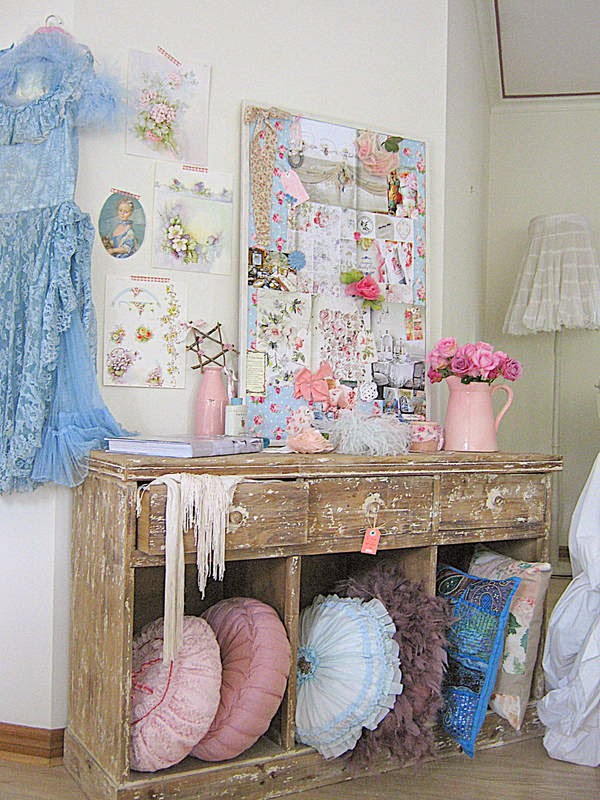 8. Bargains. Of course the best quality buys are to be found first thing in the morning however the best bargains MAY be found post lunch when the sellers are looking to finish up and don't want to be lumbered with having to rid themselves of any leftovers....time to offer them a deal they WON'T WANT to refuse:-)
l'm thinking l might need to write another post on this topic 'cos l still have lot's more ideas but l hope these help for now:-)
Have an awesome weekend everyone, and thanks so much for your lovely visits and comments on my de-cluttering post....it's so great you enjoyed it.
Catch you later...
Bron.
Posted by vintageandart at 1:28 PM 5 comments:
Email ThisBlogThis!Share to TwitterShare to FacebookShare to Pinterest

The Lighter Side Of De-cluttering.

Yesterday l was listening to a webcast of Oprah chatting to a professional de-clutterer and me being the potential CLUTTERER..... l was all ears.
These are the 10 things l want you to get rid of TODAY....starting with PAINT, you know those old tins of touch up paint for your house, go out now and get rid of it all.....well, she lost me at GO 'cos l don't even know what SHED those tins are IN, let alone be able to locate (or remember) those specific colours amongst the millions of tins that have accumulated out there over the last 20 years.
Then....All your old pens, those promotional pens and non-working pens lying around in drawers.....THROW them...and l'm like, is she SERIOUS....l can't even FIND a pen in my house, so lf l spot one, l sure as hell WON'T be throwing it out.
Also.... now ALL your old mobile phones...Don't know about YOU but l'd need the help of a couple of SES workers and a sniffer dog to pull THAT one off :-).....but the absolute kicker was when she said, now ladies go and throw out all your excess black boots....she obviously has NO idea how many miles, markets and opshops it took to find even ONE decent pair of black boots, so just NO....and then l had a light bulb moment. She must be a de-clutterer for NORMAL people and not for ACTUAL pickers, hoarders and collectors, so l thought l'd write a few (SEMI) serious tips for THE REST OF US. 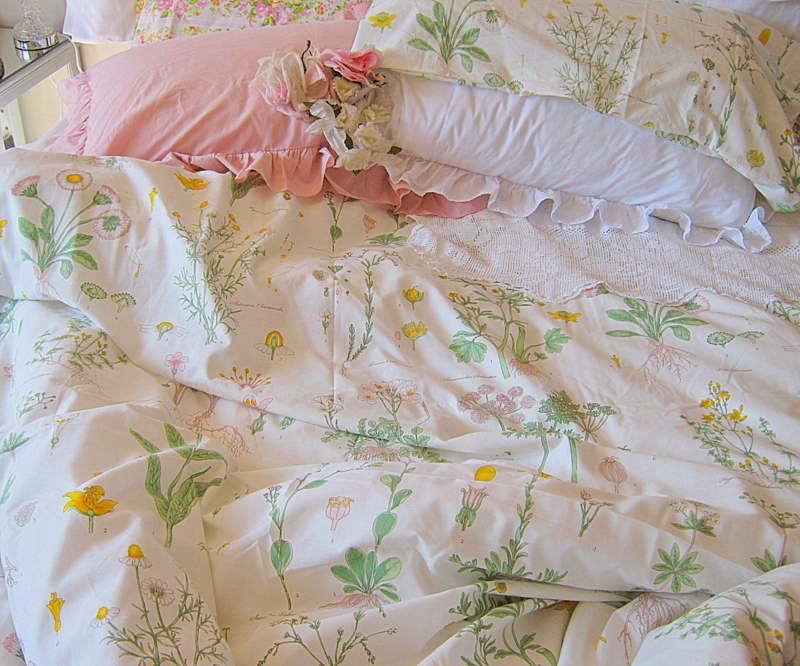 1. l won't say PLAN.....let's just be gentle on ourselves here.....but l would say keep in mind a day through the next week or so where you MIGHT have a free hour or two and set it aside for a "tinsy"  tidy up....hey a little delusion can't hurt :-) 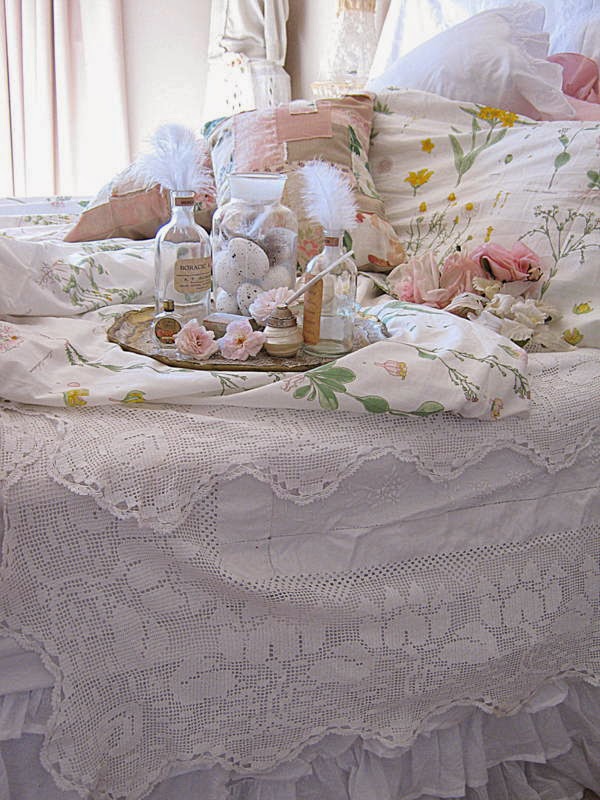 2. It definitely helps to be at your least stressed, so if you're an early bird, start early so you can start fresh. If you're a night owl wait 'til late when the house is quiet and begin then.﻿
3 DON'T de-clutter when hungry....a non rumbly tummy will go a long way to stop you from flagging in the middle of a process that COULD take (WAY) longer than expected:-) 4. HIDE your phone so you won't hear it and turn off the telly....the least distractions the better and try to de-clutter alone, other people can also be distracting and dare l say it...annoying, even if they ARE just trying to help. Unless of course they're professional de-clutterers, in which case you won't NEED my tips...haha!!
5. Start with one pile at a time, and make it the one that annoys you MOST...maybe it's the one on the end of the bench, the table, or in the corner of a room....that way you can get the maximum pleasure from the space when you're done, which might also encourage you to continue....even if you only do ONE drawer, cupboard or space at a time you'll eventually GET there. 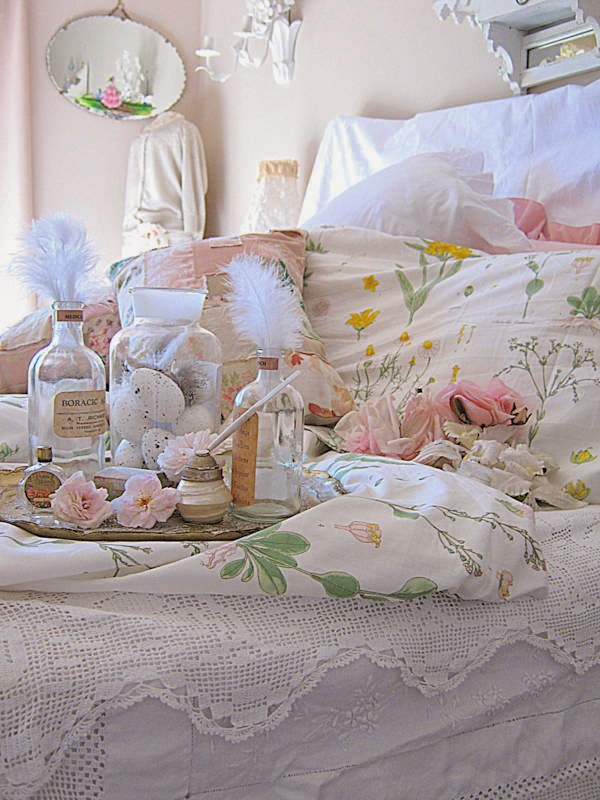 ﻿
﻿
6. Now the professional de-clutterer will say make THREE piles.... a keep pile, a throw pile and a send to charity pile...but DON'T do this, it's way too slow and confusing.....make TWO piles only... a keep pile and a "yeh but" pile, which is shorthand for the..yeh but l can DO something with THAT pile..... At least then you'll have TWO distinct piles. 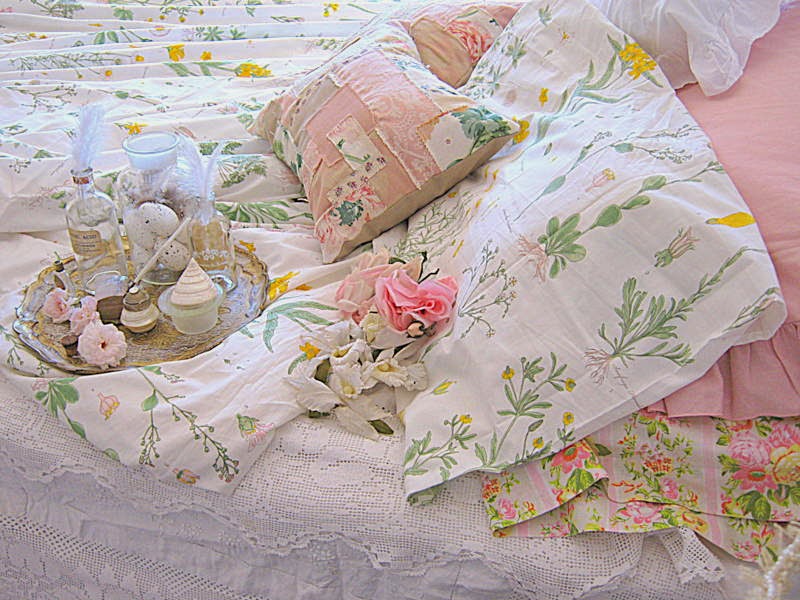 7. Sort as quickly as possible so as not to overthink things, this will also prevent you slipping into a coma from either confusion, distraction, boredom or all of the above:-)
8. If you've been working on a pile that doesn't have an ACTUAL home, eg. the end of bench or table top pile, after sorting try and stuff what you've KEPT into a cupboard somewhere and that can be a project for some other day.....you KNOW how this works right:-)
﻿
﻿ 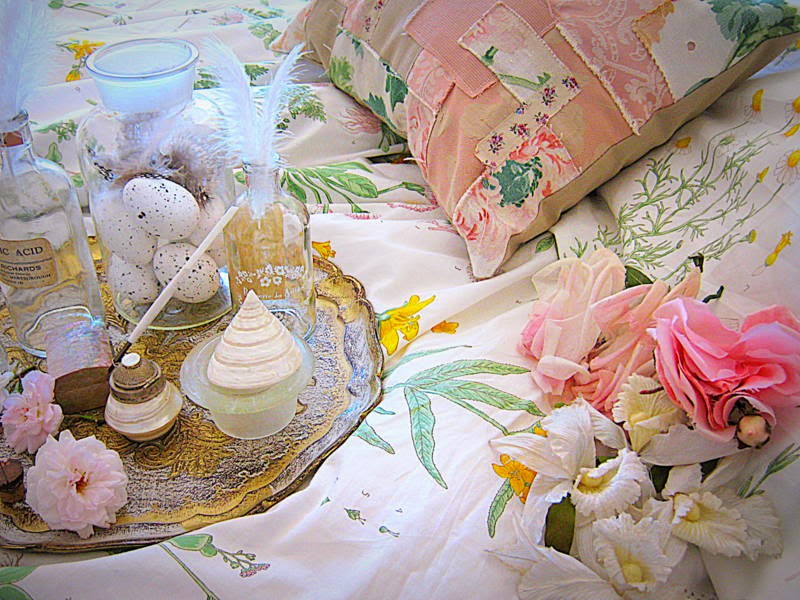 9. After sorting try and find storage for what you've saved or display it beautifully somewhere so you can enjoy it. Then there's only the problem of what to do with the "yeh but" pile (which of course you also want to KEEP).....but ask yourself rationally if you'll REALLY make or DO something with ANYTHING in that pile over the next few weeks....more than likely you won't, so seriously TRY not to even sort through this pile and throw it ALL immediately into the bin so there's no time to rethink......if some of this pile is truly too good to bin then bag it up and place it in your CAR right away so it can be dropped off the VERY next time you're out. 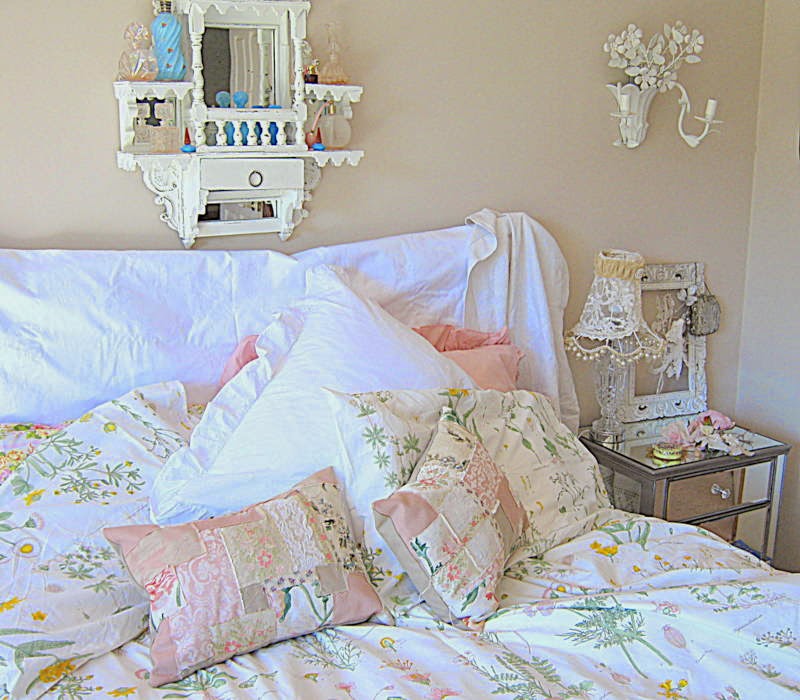 Botanical print doona cover was found at Ikea.....VERY reluctantly l even threw out an old one to make way for the new one:-))

l hope you've enjoyed my tips....even though I've written them as a bit of a laugh, most of them actually DO work for me, it'd be great if they did for you too:-)

Have a great weekend everyone and catch you soon,