l passed on your kind and caring messages to Mum through the week and they really helped her feel better, she wanted me to say thank you and  to let you know that she's going ok.... and there's a bit of a story along with that.
For a couple of years now Mum's had eye problems, a dryness and irritation so persistant that it's been almost impossible for her to do the fine craft work she'd previously enjoyed so much.... putting it down to the chemo she recieved about 3 years ago... and her age, she's even had two new pairs of prescription glasses in two years....but... a couple of days after Fergus died she said her eyes were feeling SO much better..... and now a week and a half later she's back to crocheting, fine stitching and reading small print again,...she said even if she'd known he was causing an allergy she wouldn't have done anything differently.... but now says she feels like she's been REBORN... and has already knitted a couple of scarves and crocheted a doyley for her Sister.... and is now knitting a bag... WHEW!!!... Amazing. 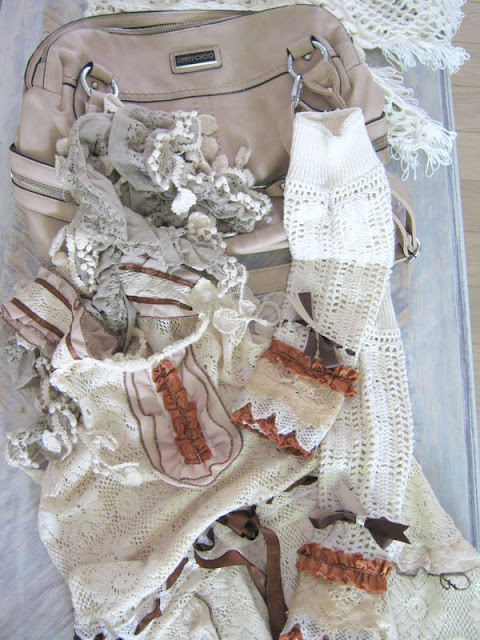 l hoped you might like to see the armwarmers l made a couple of months ago, of course it's coming up Summer here so with any luck l won't need them for a while:-)) but maybe for those of you going into Winter the idea might be useful.... The sleeves were cut from an old jumper and as the cuffs weren't too tight they became the upper arm end. The "new" (raw)  wrist ends were overlocked and decorated with various pieces of lace and ribbon, as well as the ruffles l pulled from an old cushion cover...After all the bits were sewn on, the sleeves were reshaped and sewn. They were to match this lace top which also got a bit of  a revamp with the ruffle and ribbon treatment.﻿ 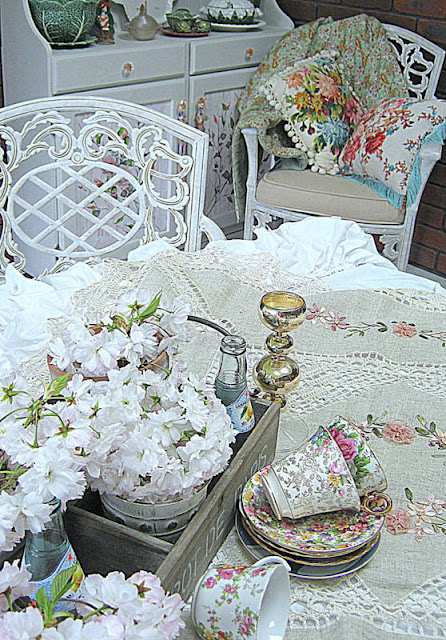 This beautifully hand worked tablecloth came from the market..... all ribbon embroidered onto a type of hessian which has been joined together with crochet... just $25.00 (new) all that work...l didn't even try and haggle..
﻿
﻿ 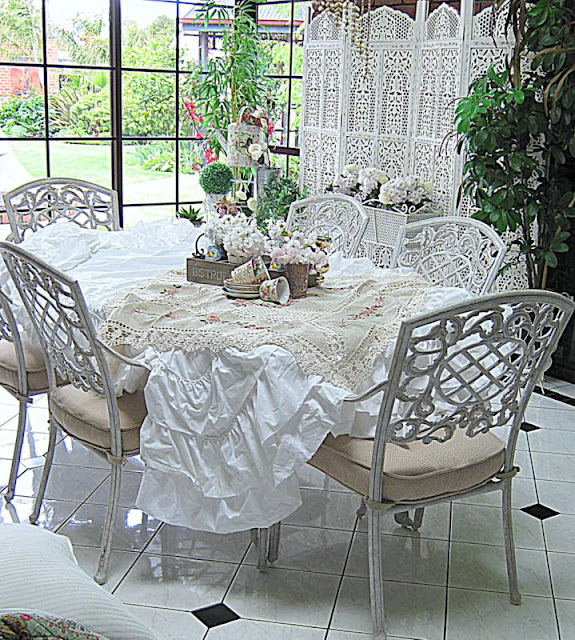 Last week l finally took away the old black screen from the brick wall in the garden room and replaced it with the white one...nice and light now....since everything got a bit of a clean as l went l thought l may as well take some pics.﻿ 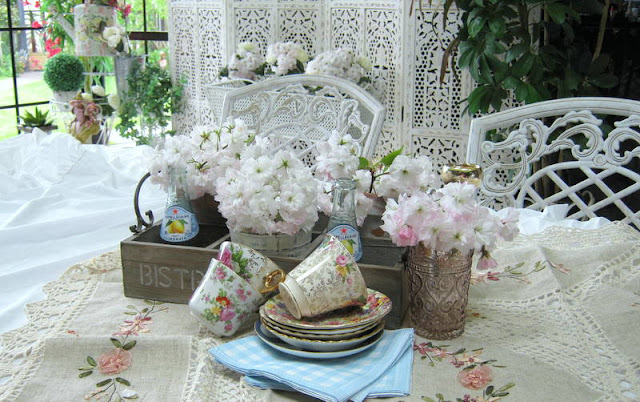 Found a few of my floral cups and saucers...lots of single pieces l've accumulated.
The cherry tree l showed last post had a few rogue branches so l  pruned them and used the blossom to pretty up the room. 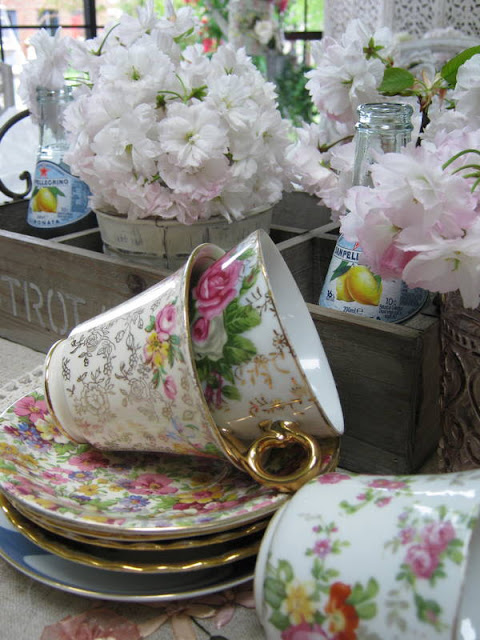 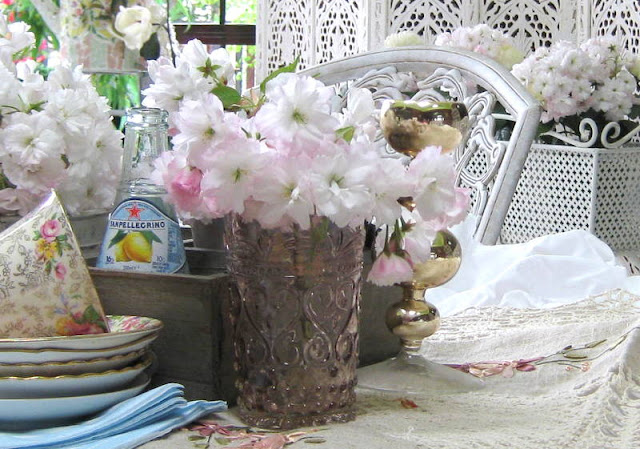 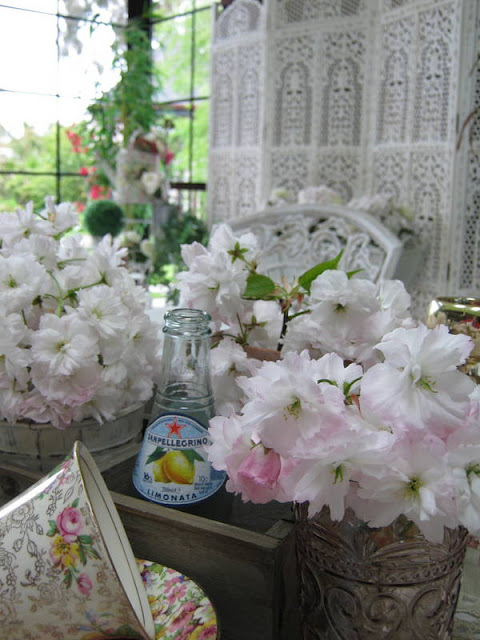 l know we shouldn't wish our lives away (and l'm not really) .... but our daughter who lives (interstate) about 2 thousand kilometres from us, is travelling to Melbourne this weekend....which means we'll be able to catch up in person for the first time since last Christmas....so you can imagine.....I'm a wee bit excited!!!

Take care and have a wonderful weekend, thanks so much for taking time out of your busy days and lives to stop by.

Bron.
Posted by vintageandart at 2:55 PM 17 comments:
Email ThisBlogThis!Share to TwitterShare to FacebookShare to Pinterest


Well it's been a busy week here and a little bit sad....my Mum had to make the tough decision to put her precious old dog to sleep...Things are constantly changing aren't they, usually it's so slowly we barely notice, but then an event will happen that marks a place in time and the end of an era. 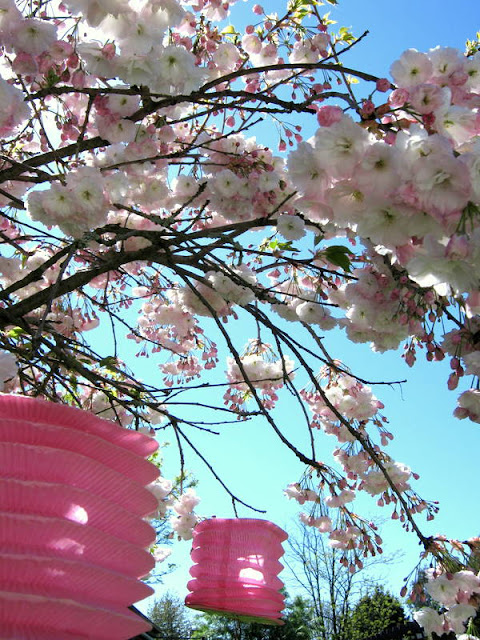 ....so with change it's great if we remember to record a few things....even if it's just the little things.     l eagerly wait for my cherry tree (Japanese weeping) to flower each Spring....checking almost daily to see if there's a bud open, then l know it's not long 'til she looks like THIS.... Sunday the sun shone so l hung out some old japanese paper lanterns.....l DID hang other colours but this picture was my favourite even though there's only pink ones showing. 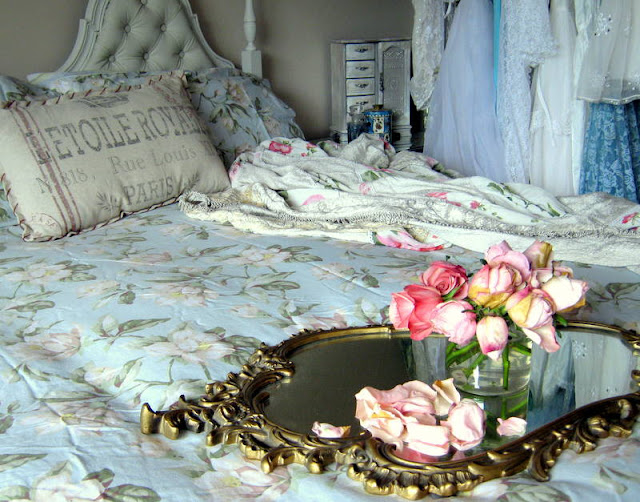 Found this Laura Ashley doona cover at the opshop recently, smothered in magnolias and such pretty colours.....just $3.00 WITH matching pillowcases....but that's it, l'm not looking at linens ANYMORE...enuffs enuff.. haha!!. 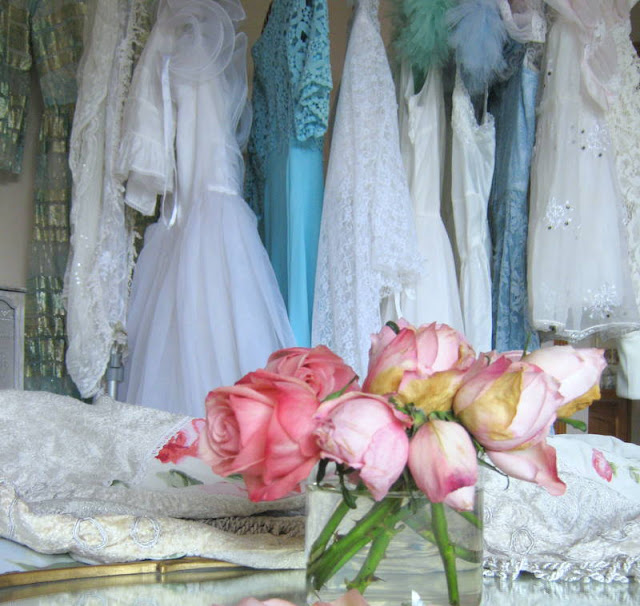 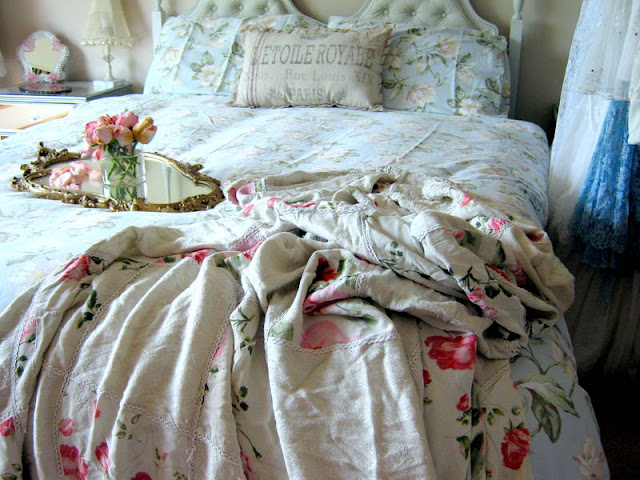 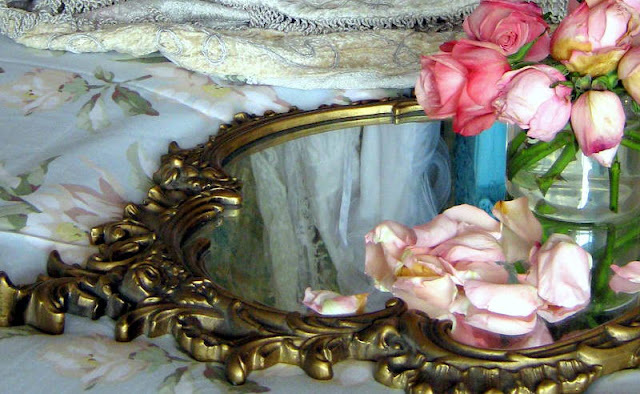 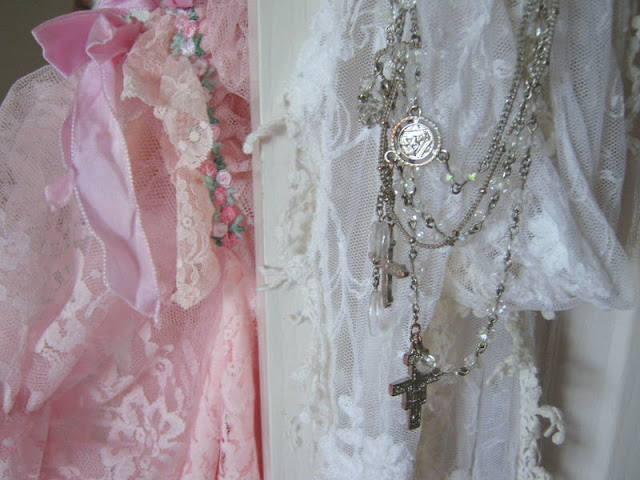 Another opshop find....necklace made of beads, chains and all kinds of crosses. 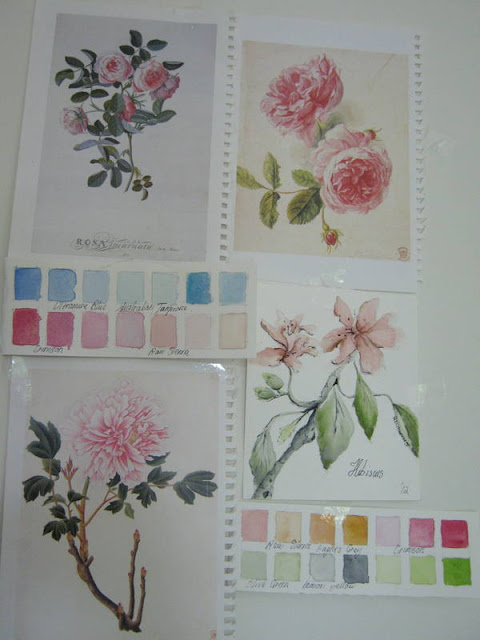 A couple of weekends ago we visited a fantastic Botanical art display at the art gallery of ballarat featuring Australian plants by Australian artists from first settlement, until present day.
If you're into plants and paintings it's well worth a look if you're in the area.
After my visit to the art gallery, l was all inspired and pulled out the water colours...l had great fun painting a couple of colour cards and a hibiscus branch.... photographed with botanical pages from an old diary.


l hope you all have a great rest of your week and a happy weekend coming up.
Thanks for your much appreciated visits and kind words.

Posted by vintageandart at 12:33 PM 13 comments:
Email ThisBlogThis!Share to TwitterShare to FacebookShare to Pinterest

Bird on a Wire.


l've been putting another moodboard together.....it seems to me almost therapuetic, choosing the pictures and their layout.... the adding and rearranging... and even the deciding, WHEN to stop:-)) 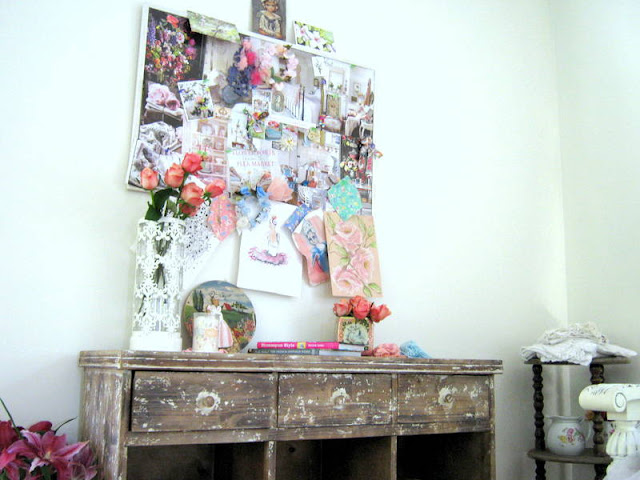 l guess we hope our creative processess will be inspirational,  both for ourselves and for others, after all .....inspiration is what makes us WANT to create.﻿....and l wonder if we absorb many ideas subconsciously or whether there's just something like a "creative ether," 'cos seemingly out of the blue we'll create something we think has NEVER been done... and then here we are,  flicking through a mag, reading a book, or maybe looking at a blogpost and we'll find something almost the same.  ﻿ 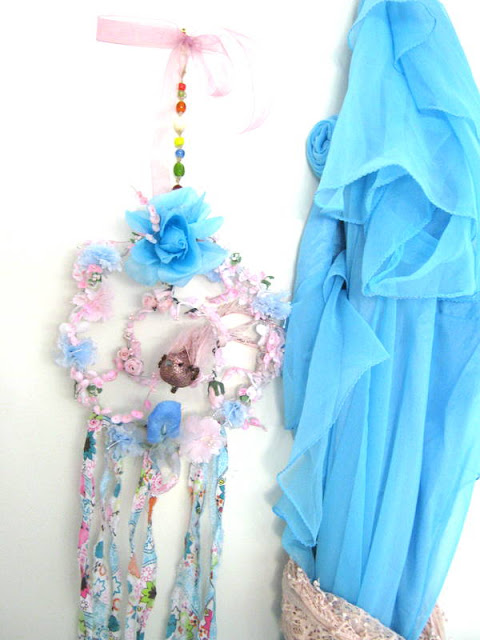 This is pretty much what happened to me when l fashioned this bird wreath from wire, strips of fabric and vintage flowers....although the one l came across in a magazine looked nothing like this one... the idea was exactly "mine".
Maybe this actually happens a lot and is what makes things - of their time...similar ideas constantly evolving and changing.... from day, to month, to year.....eventually creating era's...anyway just thinkin'.﻿ 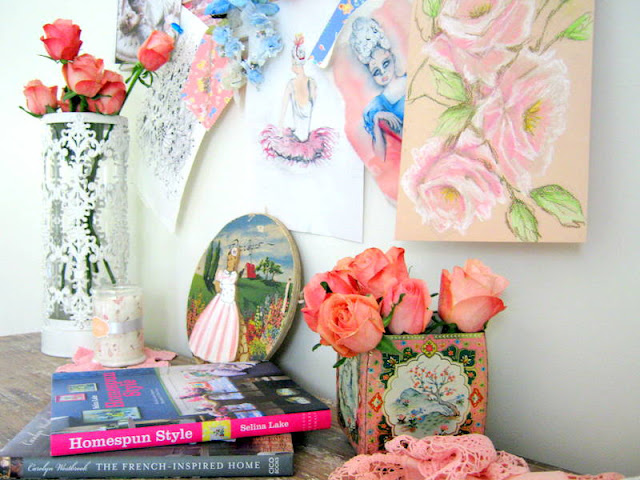 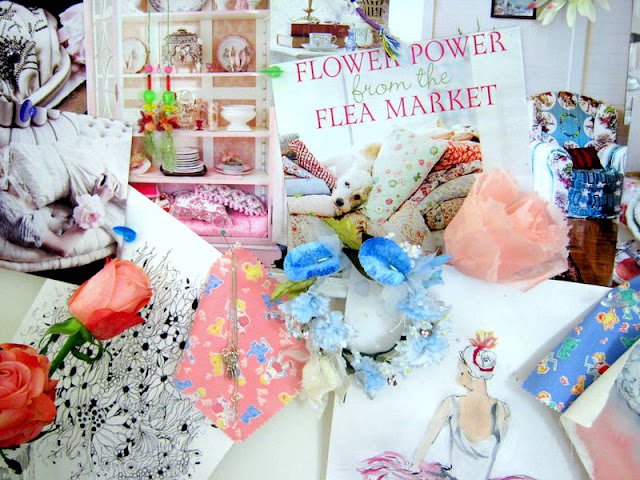 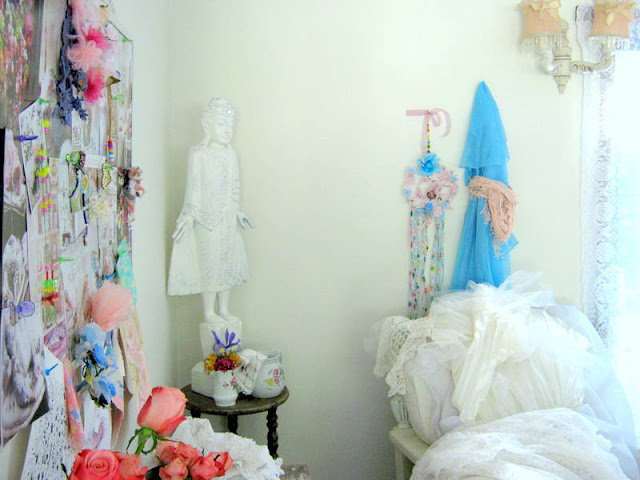 More shuffling and rearranging after l found this old round sidetable for $20.00 at the opshop last week...it's wobbly and a bit of a mess ....could be up for a MAKEOVER:-)) 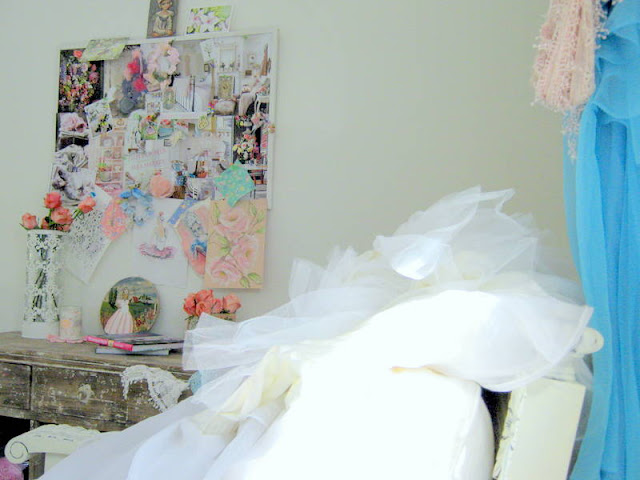 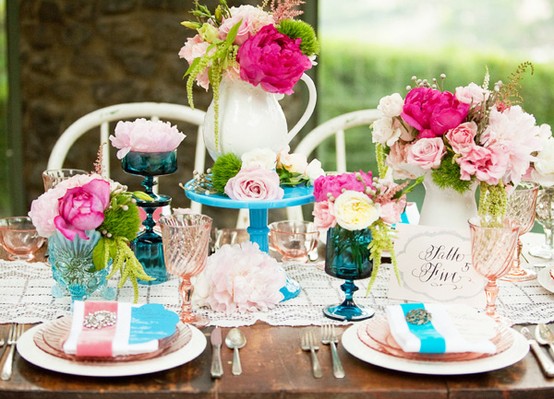 Such a pretty table setting...blog.hwtm.com﻿
Hope you've enjoyed this post as much as l have putting it together for you...Have a fantastic rest of your week..... thanks so much for popping on over.

Til next time.
Bron.﻿
Posted by vintageandart at 2:07 PM 21 comments:
Email ThisBlogThis!Share to TwitterShare to FacebookShare to Pinterest


Hi there....hope your week is going great...the holidays are almost over again...crikey the year is stampeding ahead isn't it....Thanks so much for the many Birthday wishes for Mum... and she's asked me to say you're all so lovely and kind to send them to her....it's really hard for her to wrap her head around the idea of people living from near and far flung places wishing her a happy birthday:-))....but she's LOVED it. 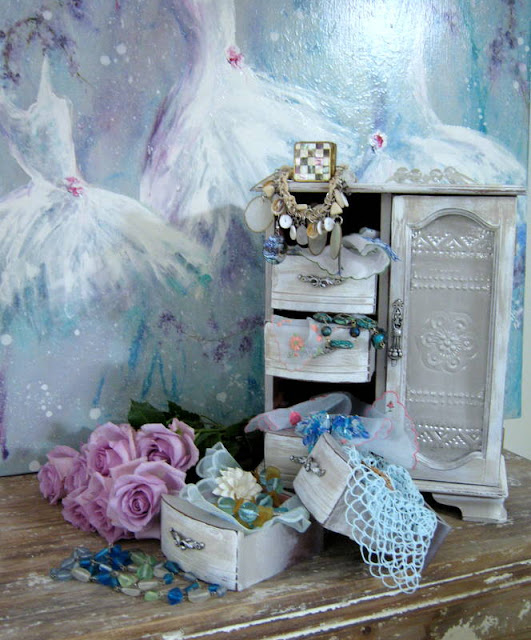 Many years ago hubby bought me this jewellery box which l loved at the time... but l'd grown to seriously dislike....l'd tried to sell it at markets but no-one bought it and let's face it... WHY would they...even if it WAS cheap as chips.....but my ever expanding plastic collection could use the space, so l decided to give it a makeover. 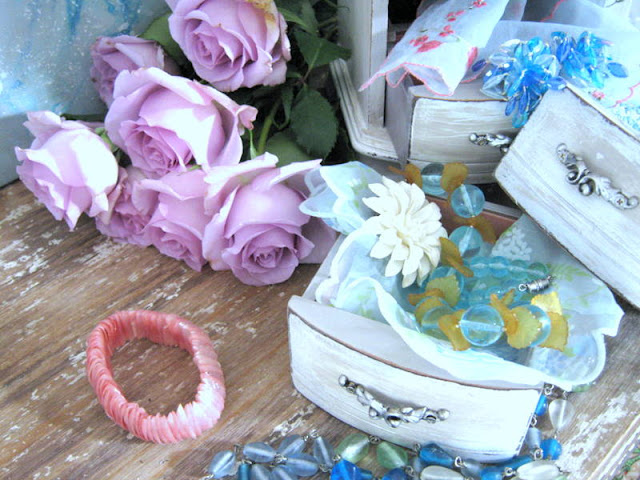 l took the glass out of the door and all the handles off to spray paint everything white, two coats were used. To give it that worn beachy look l gave the whole lot... including the foil door insert, a rough top coat of wattyl weathered wood. The glass door was covered in a (cut to size) piece of pressed foil. The handles were all returned and lightly brushed with silver paint. Finally when it was dry the edges were sanded to make it look a bit timeworn.  The before pic is at the end of this post....l didn't want THAT jarring your viewing (pleasure?) mid post....haha!! 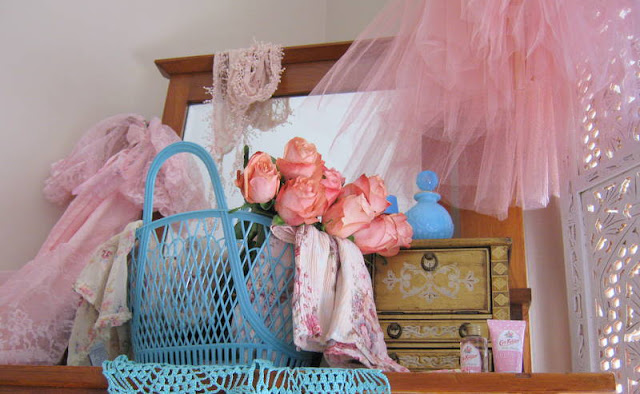 This gorgeous plastic basket found at the opshop.... became the inspiration for this post, cost a staggering 50 cents :-))....isn't she a beaut...back in the day all the women carried one of these to pop their shopping into...but l hadn't seen one for years. 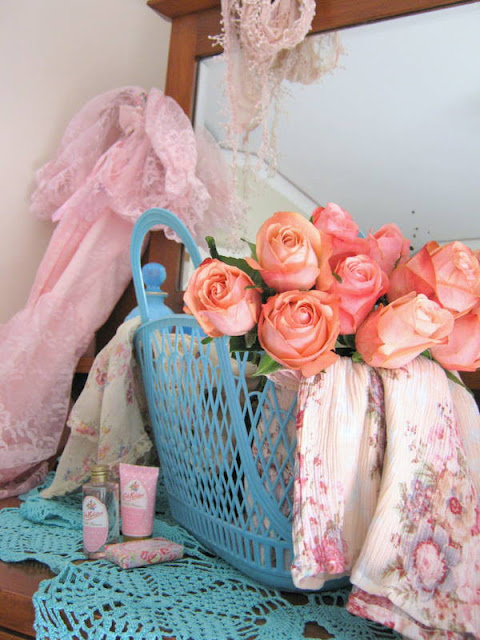 Shown here with some sweet floral Cath Kidston products my Sis  gave me. 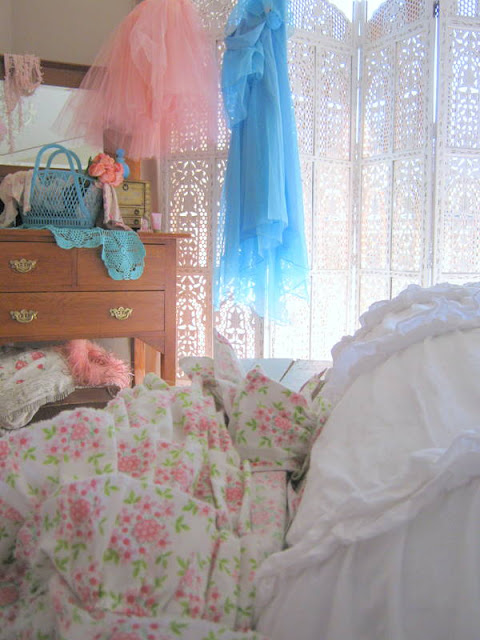 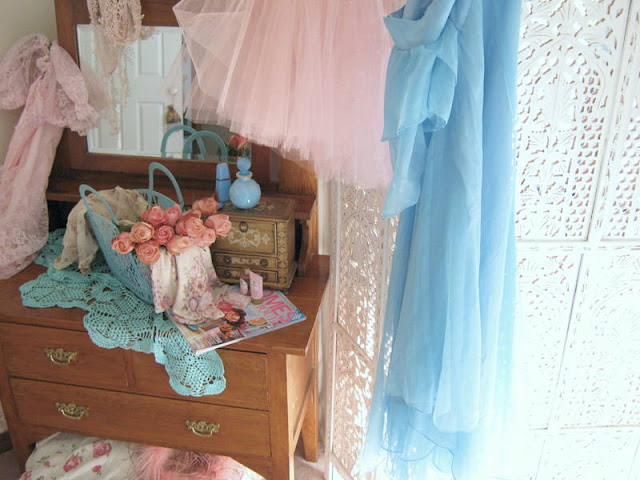 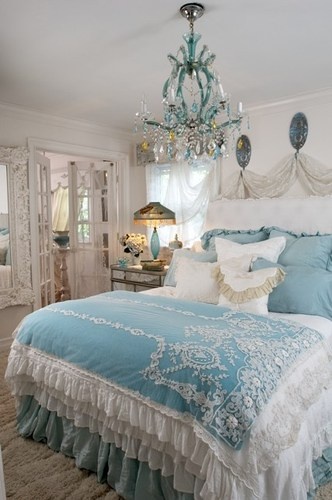 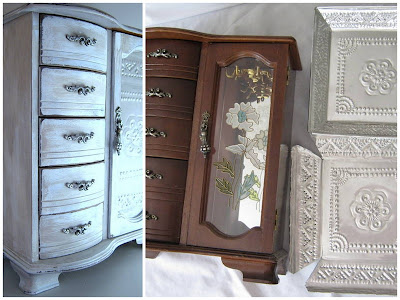 This is the before and after pic.... shown with pressed foil (tray) that was cut to size and glued over the glass.


....have a wonderful wonderful week and thanks so much for your time and kind words.