Getting That Christmas Spirit ???

As you know it's almost the end of the year and only just this week have l finally booked hubby and l in to get our taxes done (for last year that is:-) - organised person, sooo NOT.... by my estimation that makes me 5 months at least behind the rest of the world. No amount of effort on my part seems to help me get any better organised either, which is bloody annoying to say the least. 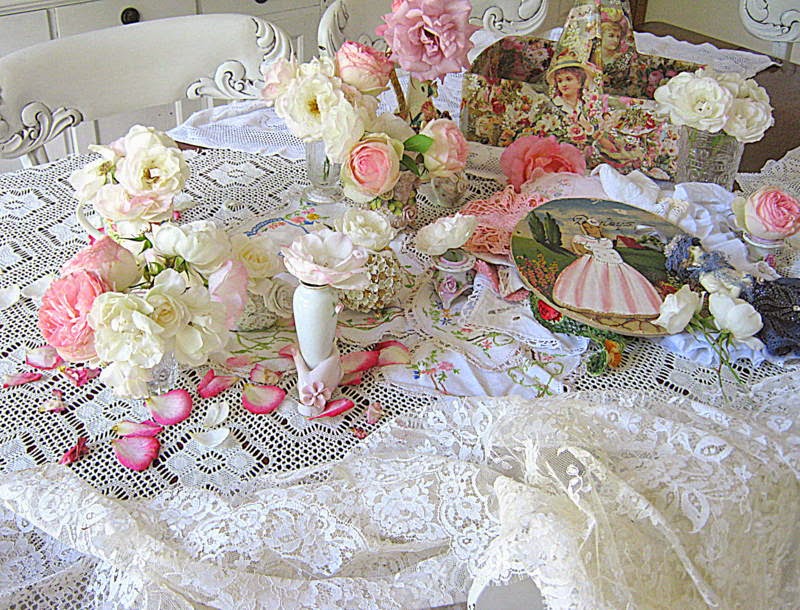 ﻿
.....and now with Christmas looming l KNOW l should at least be thinking about gift ideas for people and colour schemes for the Christmas decorating but somehow distraction reigns free here, and l just know l'm gonna have to fire myself from a cannon into the middle of next week if l'm ever to catch up and even then it'll be at the last gasp.. 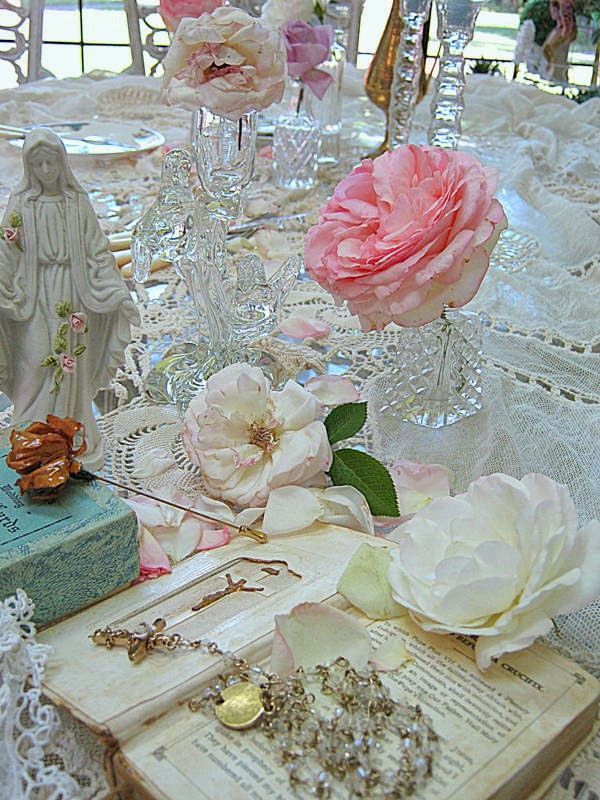 l'm astounded that some of our neighbours have already begun (the tedious??) task of decorating their entire house frontage, resplendent with reindeer on the front lawn and lights all over the house from here to the wazoo.....lf l can even find my lights (which only ever adorn the tree) and get them to work it'll be a mini miracle. 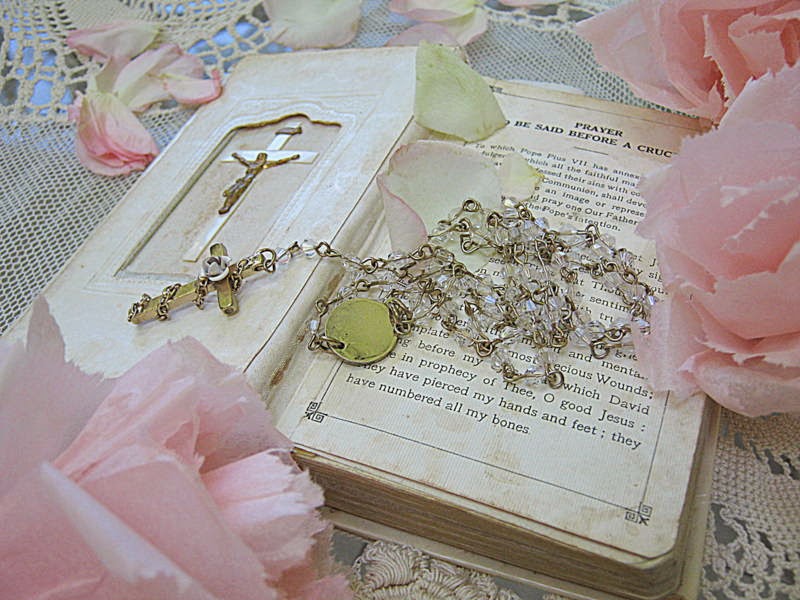 ﻿
The people round the corner from us enter the Christmas light competition every year, so not only do they spend months decorating their entire house frontage, but also the man of the house dresses up as Santa every night of the competition to welcome hordes of people and children that traipse all over his front lawn and through his (perfectly) manicured box hedging, now that's what l call Christmas SPIRIT (or pr'aps utter madness depending on your take on it, haha).....half the time we don't even turn our Christmas tree lights on.....l just don't CARE....does that make me anti-social, anti-christmas....or both:-)) 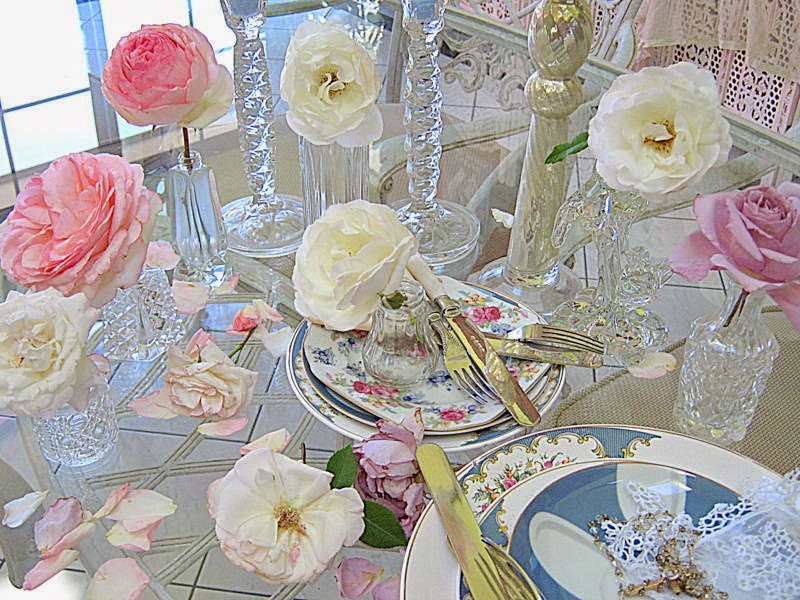 Maybe if the kids still lived at home or if l had a couple of grandies l might be filled with Christmas spirit myself and not be such an Ebenezer about it all. There used to be great fun and excitement in decorating the Christmas tree when the kiddos were young....we'd pull out all the decorations and l'd be trying to place them symmetrically on the tree and the kids would be plonking them all over the place..... l'd try to have a bit of a colour scheme going on and they'd want the entire rainbow range and we'd  use all the decorations (and the stockings) the kids made at school, even if they were a bit dodgy at times:-)....those were the days my friends:-) 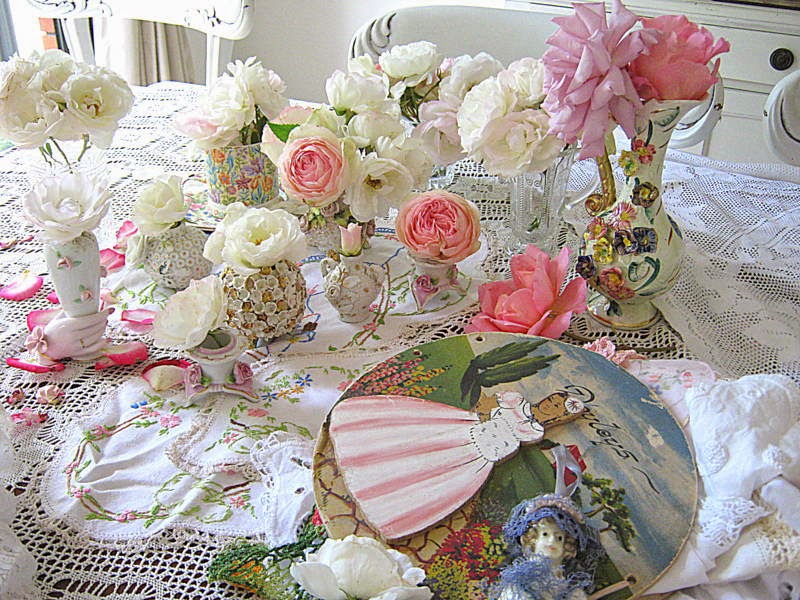 Of course these days it's just hubby and me rattling around here on our own so we like to keep it simple.....Having said that it's nice to make an effort with the Christmas lunch table since we usually host and l say host 'cos l certainly don't cook..... except for the vegies. Everyone else pretty much brings lunch  with them, mostly 'cos l'm a crap cook and they want to be able to EAT the food, but also 'cos they're just good like that and want to contribute....any way a couple of wines and no-one worries too much...(ok maybe that's just me:-)) 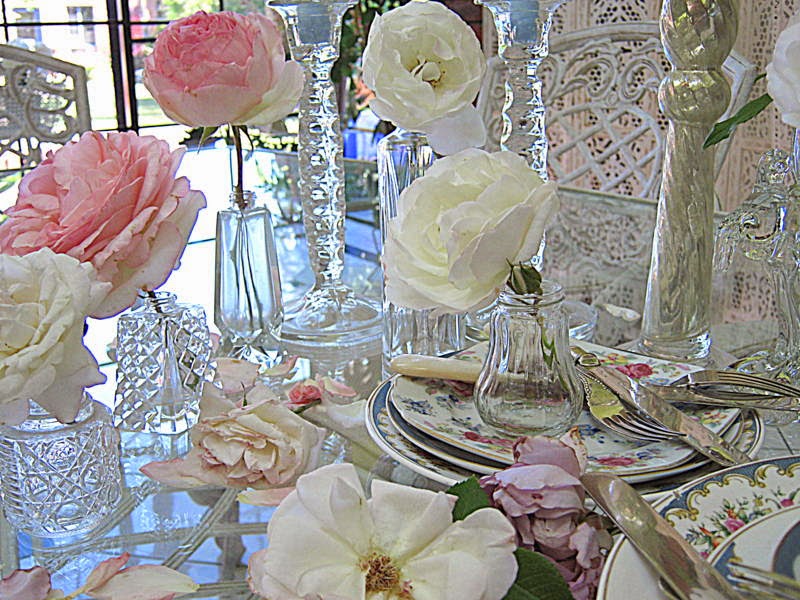 So this week as well as getting aforementioned tax paperwork organised and the usual old drudge l've been picking roses, taking photos and vintage shopping.....why would this week be different from any other week haha....
﻿ 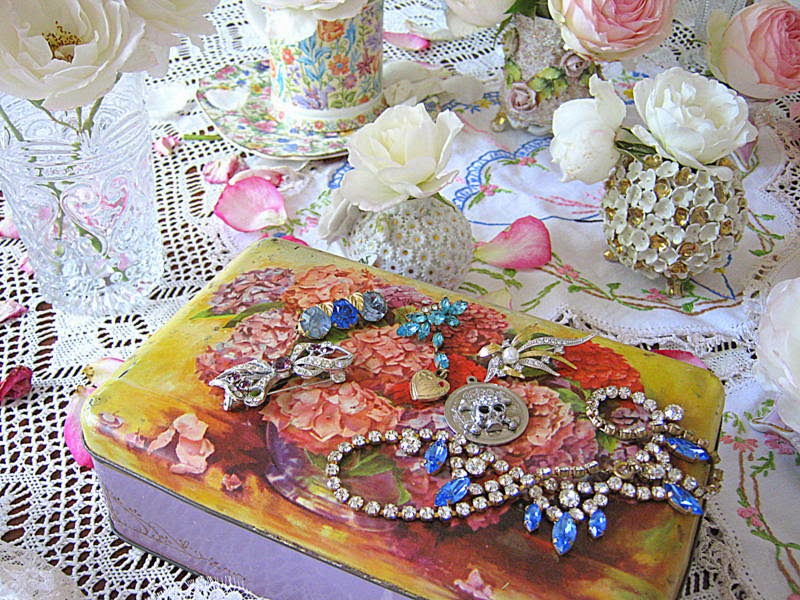 l've also been mending and reinventing some old jewellery. 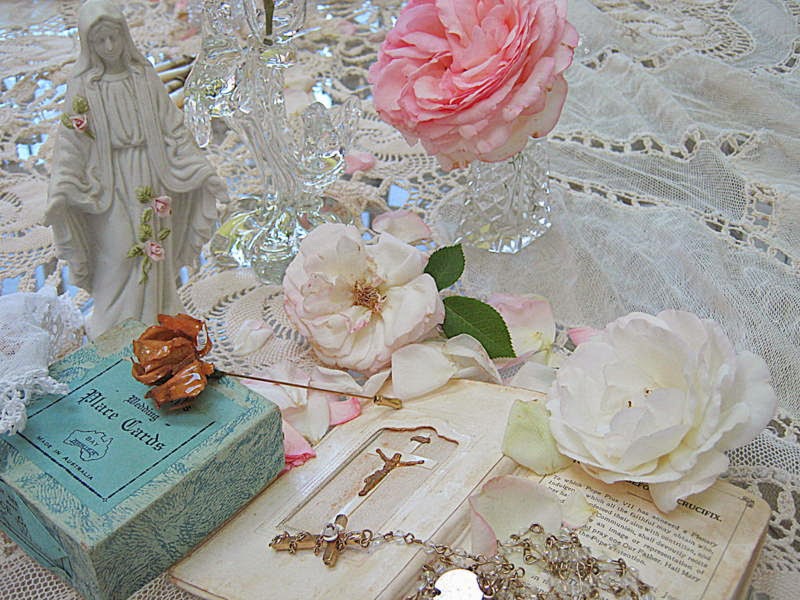 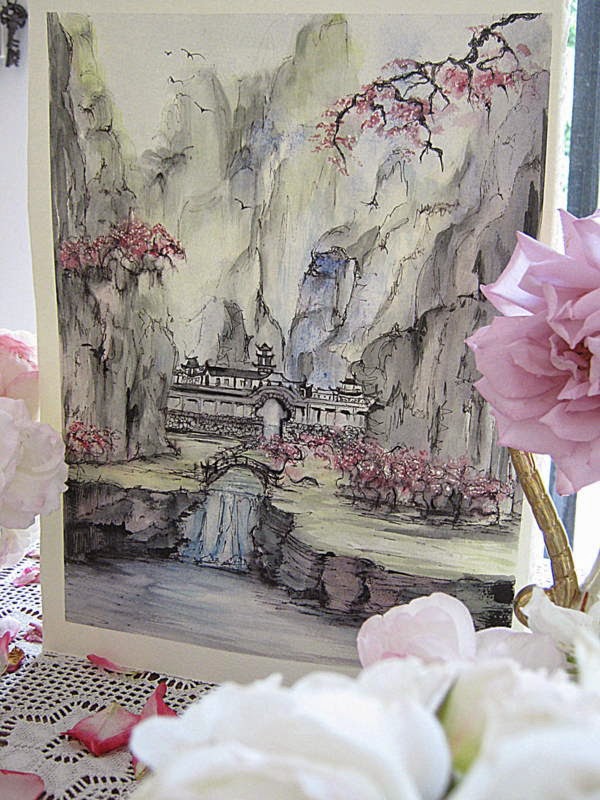 ....and maybe a little guilty pleasure.. a bit of paint and pen dabbling....ooohhh l had a thought... a Christmas card perhaps, just add bells and a santa... haha 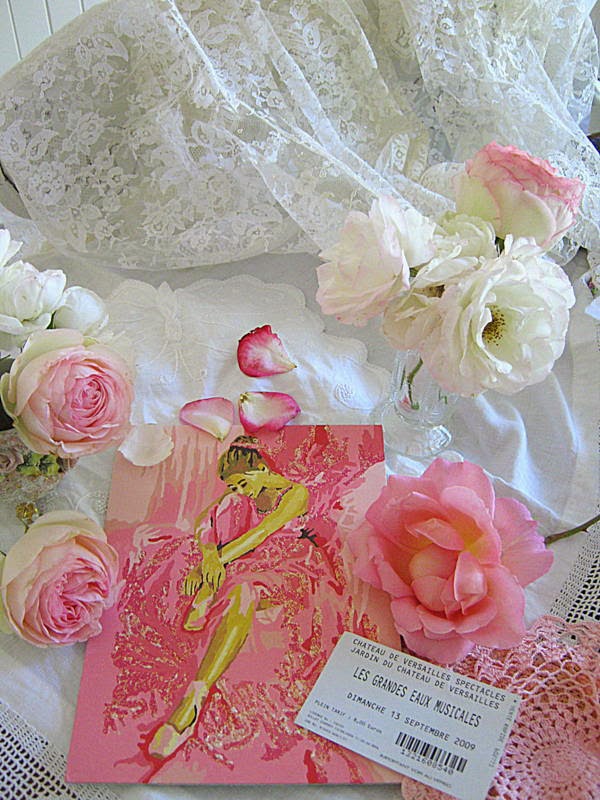 But hey, next week's a new week and l'm absolutely fully intent on getting all my ducks in a row...
Hope you all have a fantastic weekend whatever you're up to, thanks for stopping by.
Til next time,
Bron.


﻿
Posted by vintageandart at 1:50 PM 15 comments:
Email ThisBlogThis!Share to TwitterShare to FacebookShare to Pinterest

If you've been popping in here for a while you might remember this dressing table which is in our main bedroom....It was once my grandmother's, she gave it to Mum and it was in our childhood home for all the years l can remember, Mum then offered it to me in the 80's and l spent way too many tedious hours stripping back 50 years of paint colours.... so even though l was over the brown timber look YEARS ago, after all that work l was reluctant to repaint it again....However the time had COME and last week l decided to make up some chalk paint to give it that vintage painted look....l was going for pretty, but not perfect or precious in any way.

There's a before pic at the end of this post. 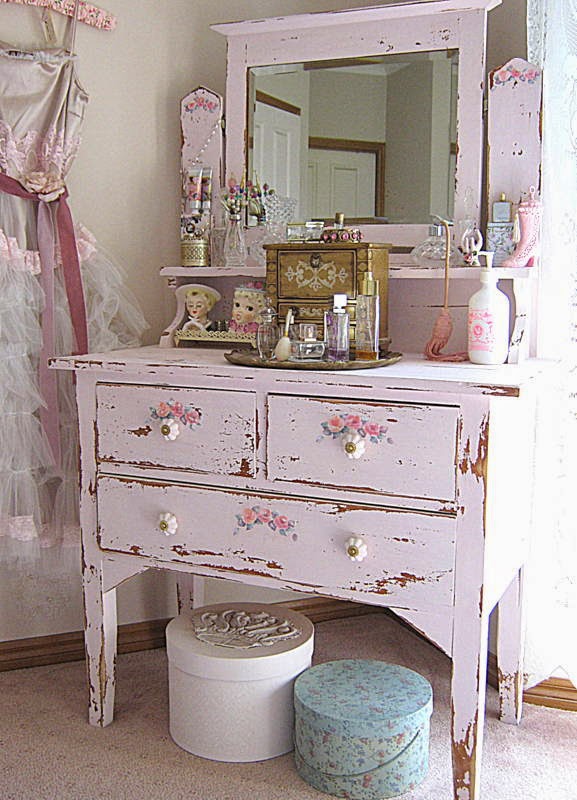 l decided to make up my own chalk paint for a few reasons....the main one being that l didn't want to have to order and then wait for it to arrive, l wanted to paint NOW....(Bron's so patient...said NO-ONE EVER:-)
Also l wanted the option to make up my own colour and the fun of experimenting with the builders lime which we had on hand in the garage.....l'd read that calcium carbonate made the best chalk paint and since that's pretty much what lime is, l figured it should work much the same way. 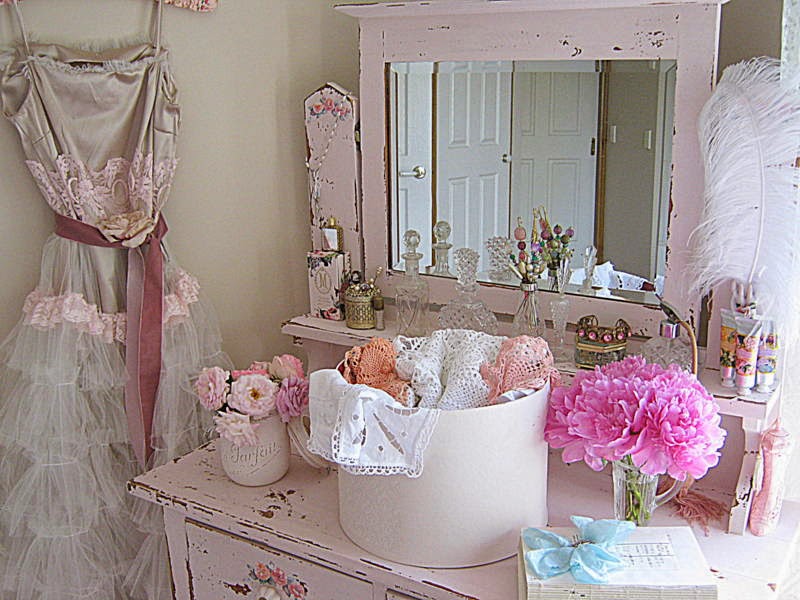 l used 2 teaspoons (level) of lime which was mixed with the same amount of water. This mixture was added to about a cup of paint (Dulux acrylic). It thickened up quickly so l added more water to keep the texture to that of pancake mix. If you want to try this it might pay to wear some (disposable) gloves and glasses (l used sunnies) as (hubby says), the builders lime may be an irritant. Once the mix was blended into the paint l removed the gloves and glasses had no problems. The paint was lovely and smooth and painted on easily. No undercoating or sanding was done at all, but since the dressing table had previously been coated in high gloss varnish, 3 coats of paint were needed for good coverage. l did NOT use any wax finishing...nothing about this paint job was to be shiny or new looking, nor did l seal the paint for protection. 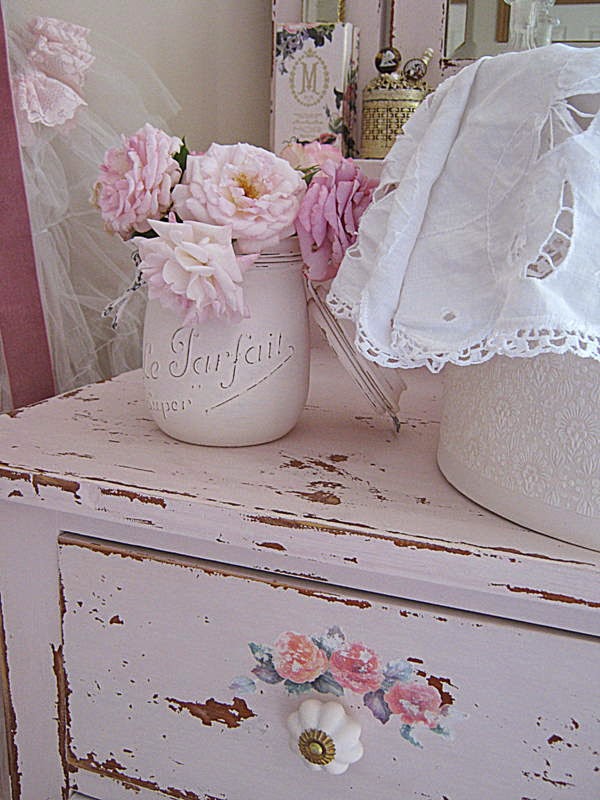 The three coats of paint were done the same day, then l waited 'til the next day before l went at it with the electric sander....This was done fairly randomly, though paying special attention to what l considered might be the wear points.
l thought about painting flowers on the drawers, but decided instead to use decoupage cut-outs. You can see in this photo where the decals were sanded before pasting, to give them a time-worn look as well. Some of the decals tore away in small areas which to my eye adds to the effect.
The drawer pulls are ceramic and were some l already had....they were right for the job, except for the colour (burgundy and white stripes) so l painted them too with 3 coats of the same chalk paint and was surprised at how well it covered, l don't think it'll wear off either...it seems to be stuck hard. 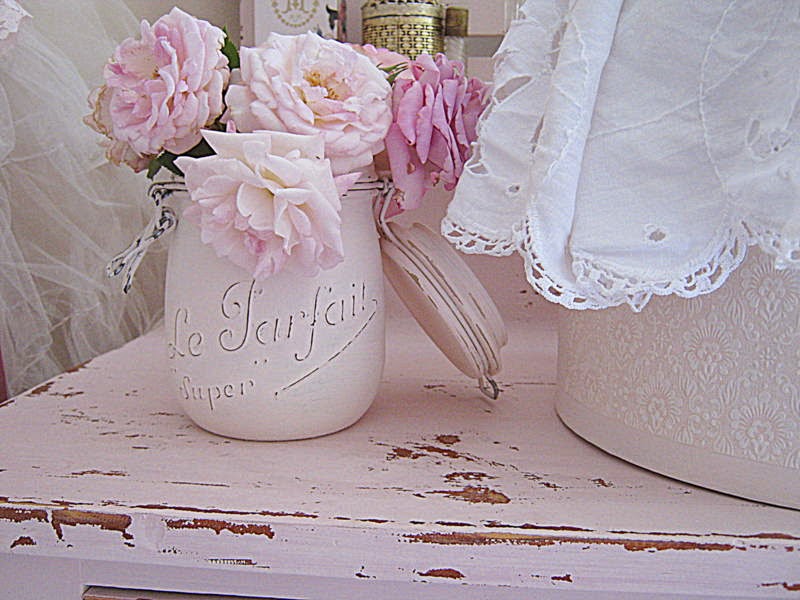 l also experimented on this old jar....l chose this one because of the embossed writing on the surface. Once the entire jar was painted and dry l was able to sand across the lettering to make it stand out, and also sanded away at a few of the edges of the lid to add the vintage touch. 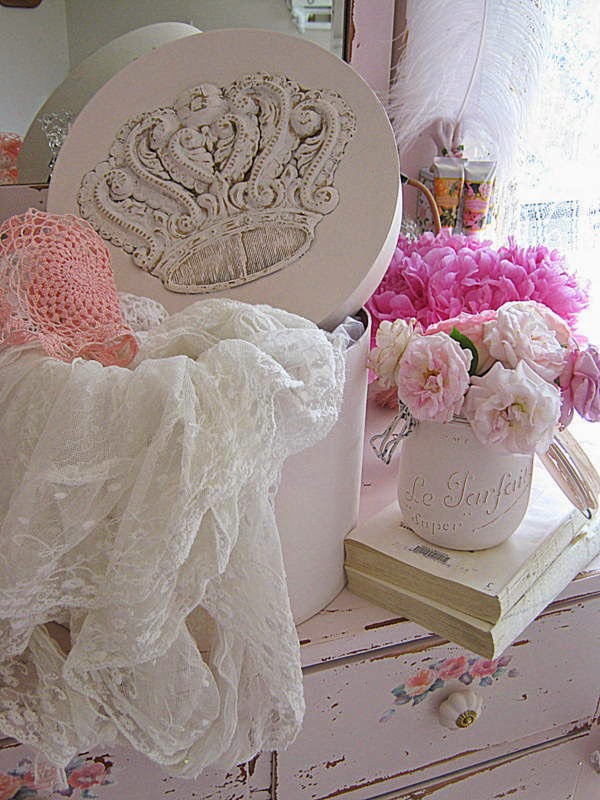 This cardboard hatbox also got the treatment, l'd found the cardboard crown months ago and the lid of the box seemed like the perfect place to glue it on. The crown was painted and rubbed back for effect.
﻿ 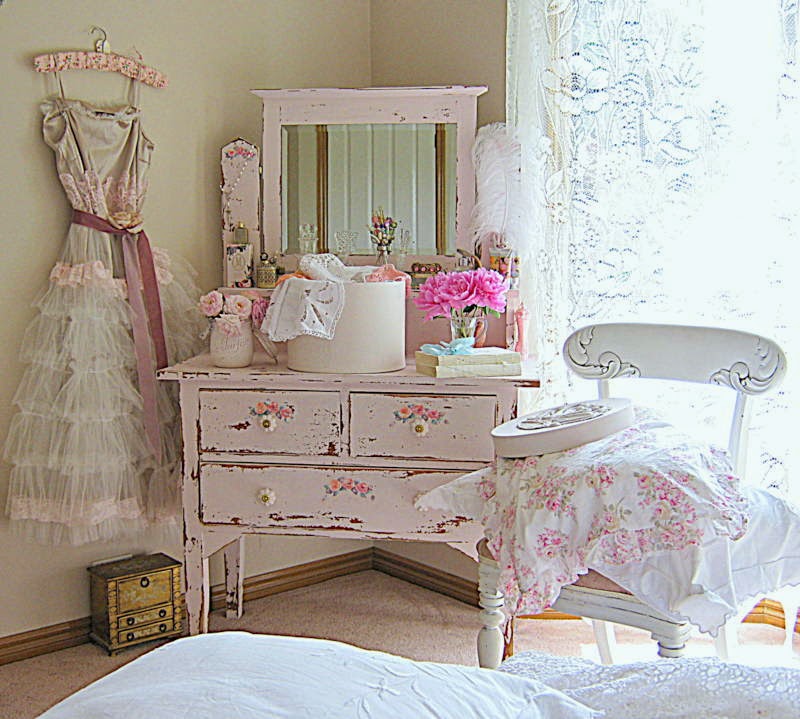 Any way to me the dressing table matches the bedroom way better and that corner is no longer dark and uninviting. 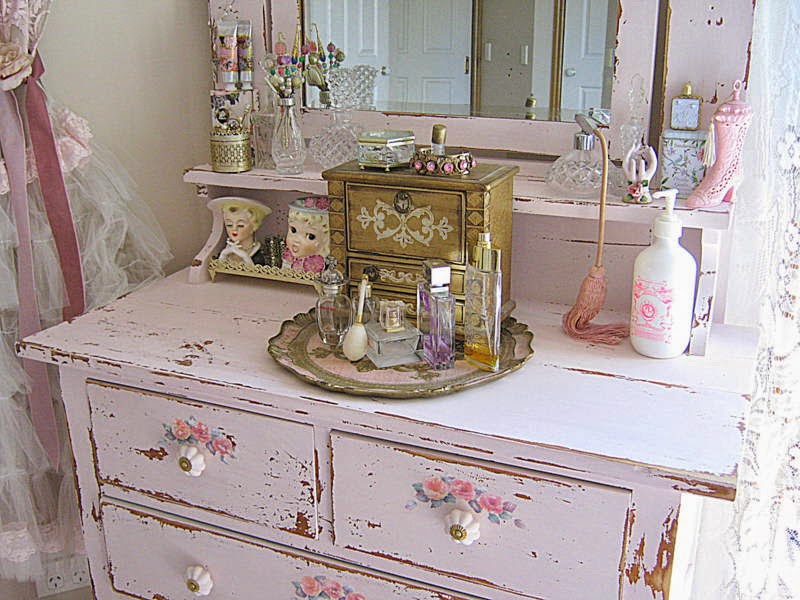 l really pared back on the stuff l kept out on the dressing table as well, and chose only the things l use and just a few pretties:-) 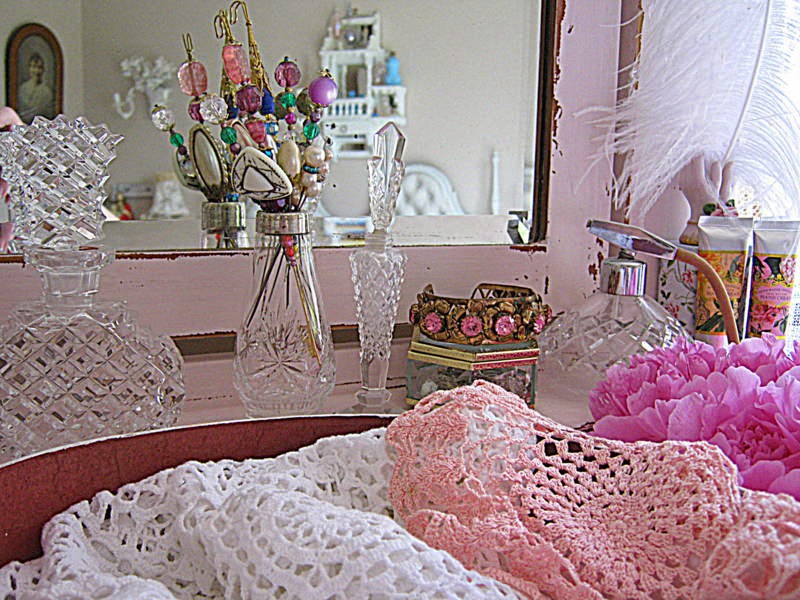 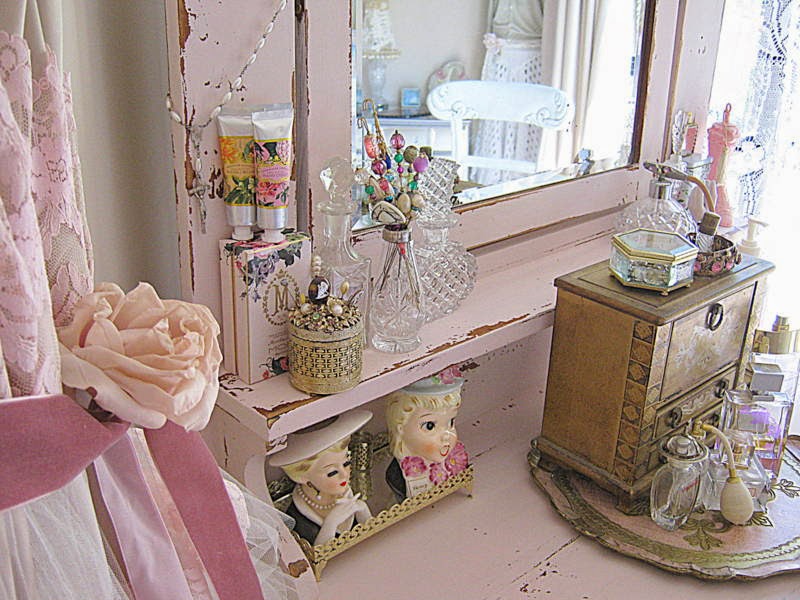 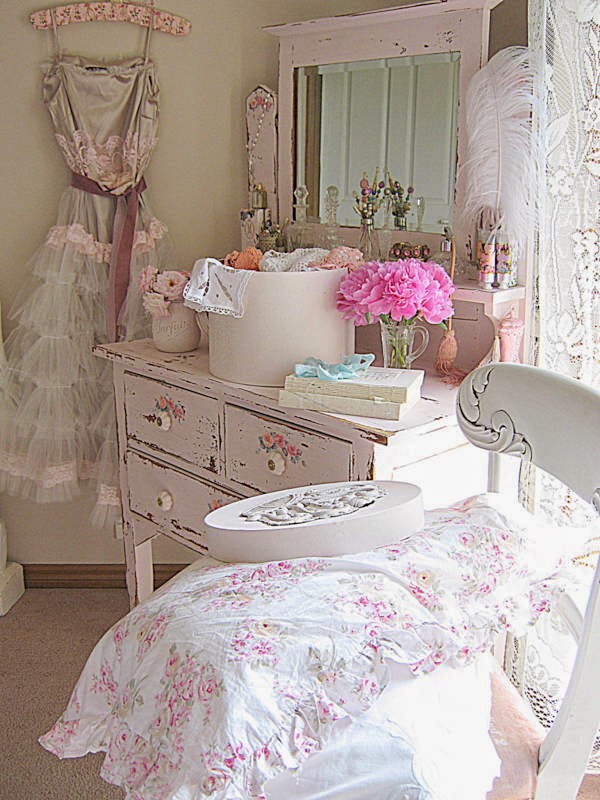 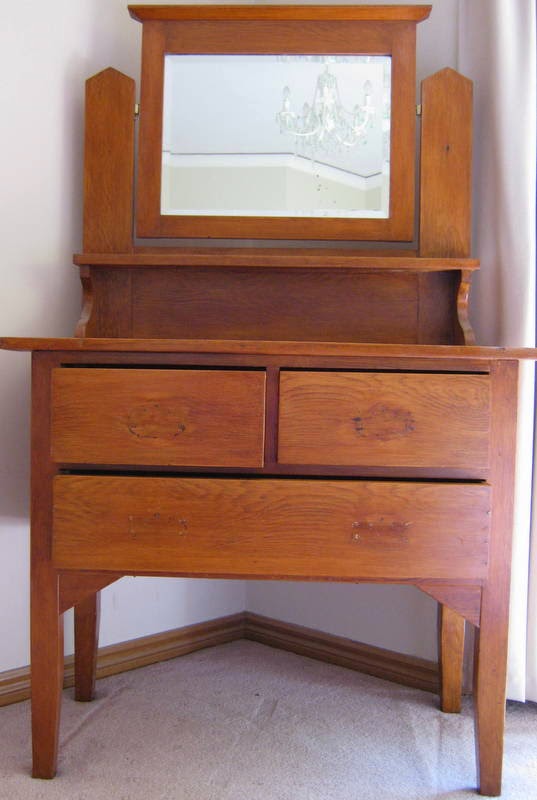 
Well l hope you enjoyed this post and that it's of help if you're looking to try out your own chalk paint experience:-)

Have an awesome weekend whatever you're up to.