It's great to have a project finished that really began before Christmas..... l bought the bedhead below as my Christmas present on ebay. It was only a few hundred dollars, even with delivery..... l considered it a bargain.. but hubby..mmm not so much.
It looks a bit Italianate doesn't it......and in desperate need of a makeover, it took ages for me to even begin....l so didn't want to tackle that button upholstery having never attempted any before, l even tried to paint the velvet to avoid pulling it all apart, but that was a total disaster, so it just had to be done. THEN it somehow had to be attached to the bed....l didn't want a bed end so there was nothing to hold it in place. (that bit was hubby's department). 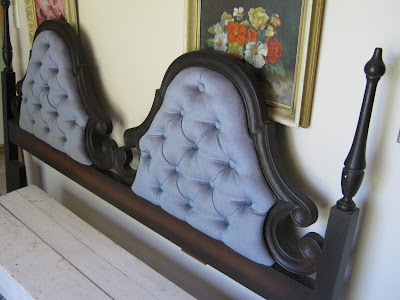 l watched a tutorial on utube which sorta helped but at the end of the day l just fiddled with the fabric till it worked. Recovered all the buttons and glued them on over the button base. 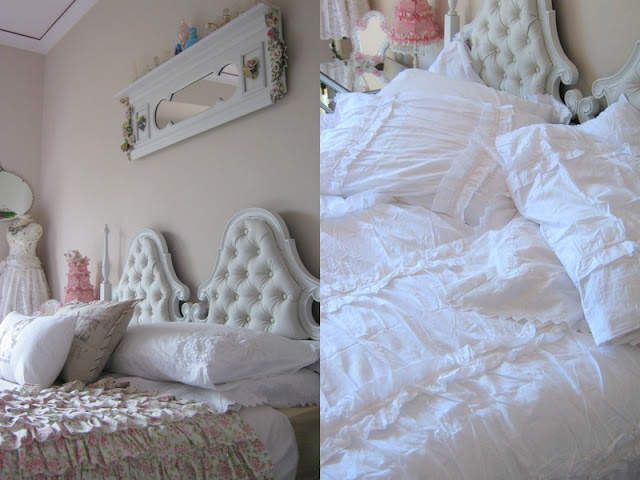 Here it is finished with it's new upholstery and a couple of coats of whiteish paint. So far the buttons haven't popped off...which l thought they might.
l bought a new doona cover for a whole new look. It has ruffles all over the place...nice:-)) 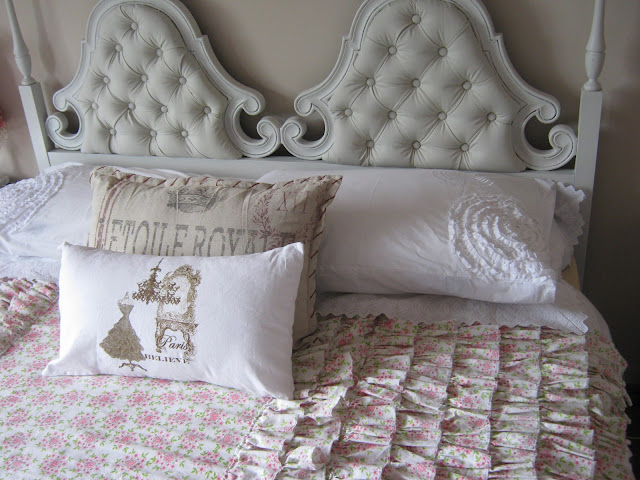 The lovely frenchy cushion at the back was also a Christmas present (thanks Sis). It finally has a place. 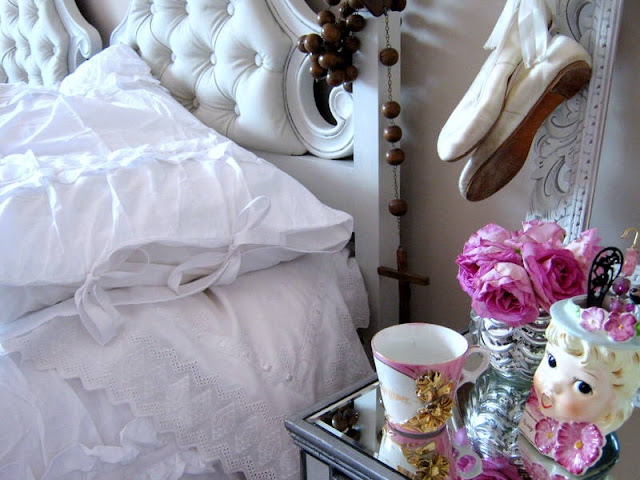 l took the pics of my market finds in the bedroom.  Japanese Lady head vase from the 50's which was a bit exy at $20, she also has a couple of chips but since you don't see these around much any more she came home with me. Also a little cup that reads " love the giver"... the guy that sold it to me was a giver...cost just a $1.00. The  satin covered ballet slippers were worn by my daughter when she was a flower girl. l've never been able to get rid of them....way too cute. 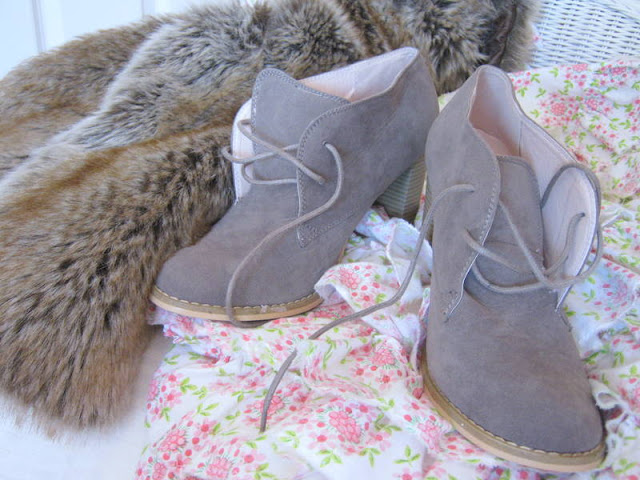 Lastly l found these awesome boots...never worn as far as l can tell and only $2.00. l'll sure be glad of them come Winter. 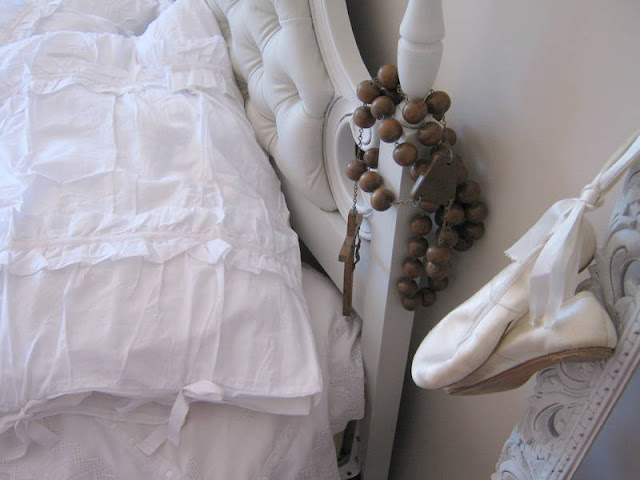 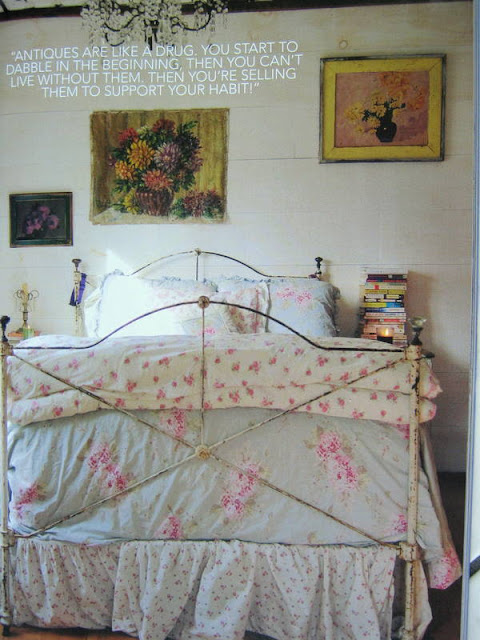 Well as if l hadn't messed around enough with the bed......I saw this photo in the new Country Style magazine   l LOVED this floral valance. l've never seen one in the shops but thought it couldn't be too hard to make one.﻿ 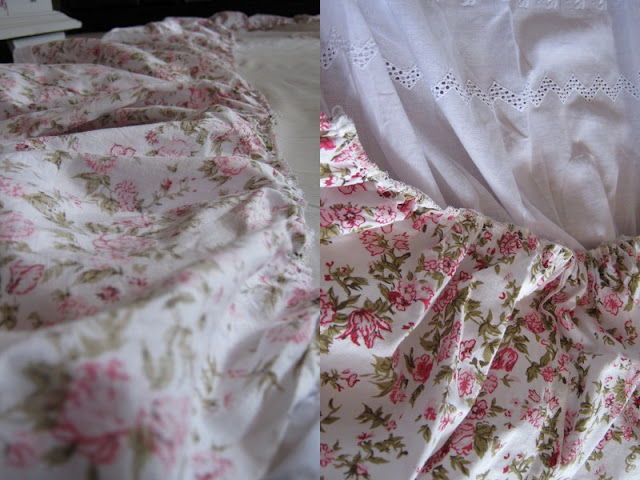 Really just made a large frill which l did in three sections and sewed them all together when gathered, as l figured otherwise the gathering thread might break if too much length and weight strained it. l also used the fabric inside out as the "right" side was too bold.... a subtle effect was more what l was after.﻿ 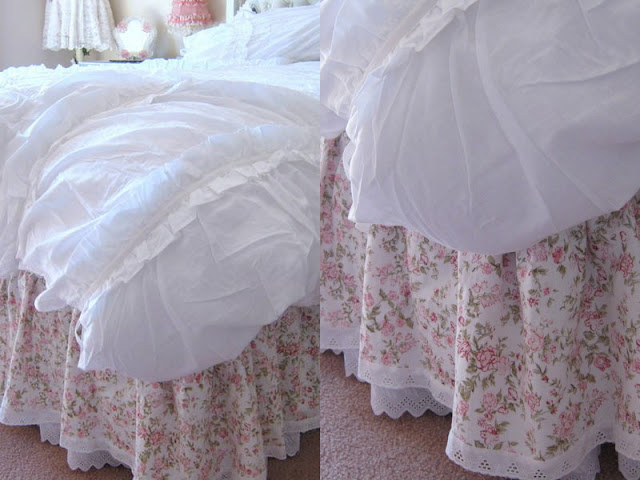 After edging the frill with lace l sewed the entire length onto the existing valance. You might notice l've made it a little shorter than the original so that it shows through to give a double ruffle effect. 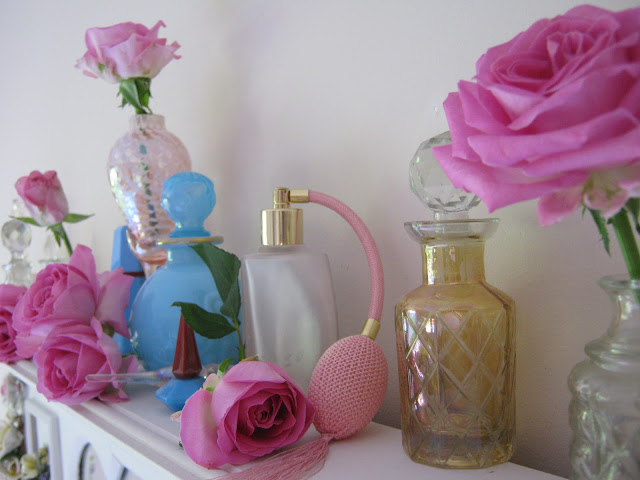 The shelf above the bed also got a new display...and the roses were added for colour. 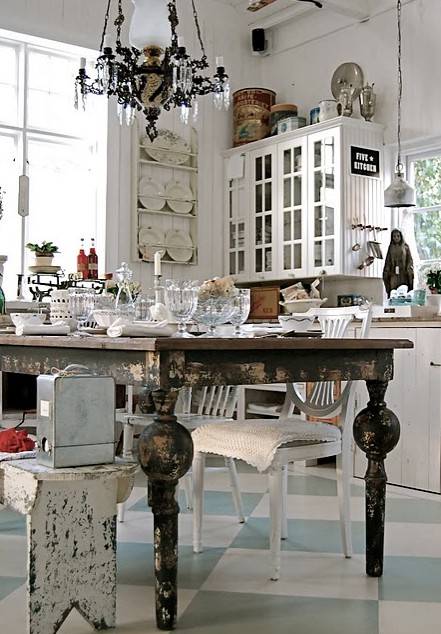 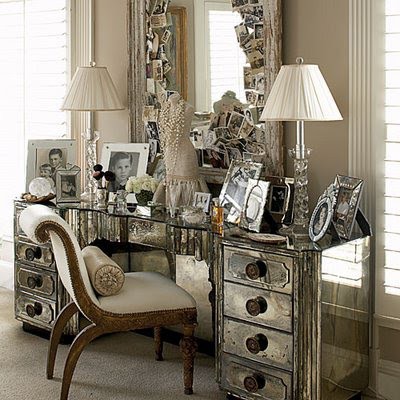 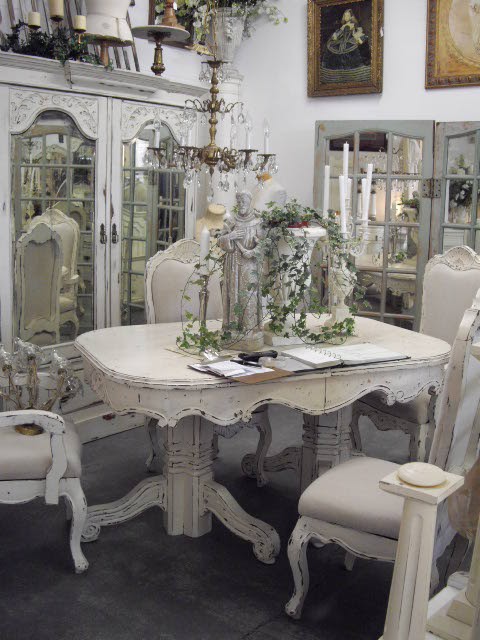 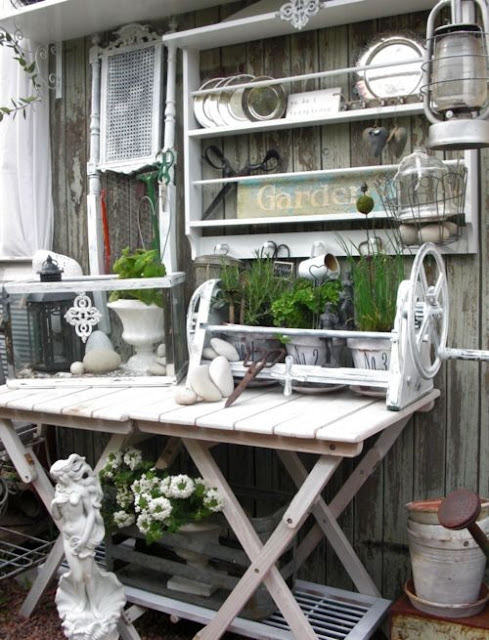 Lovely everything....lovefrenchbulldogs.
l hope you all enjoy the coming weekend....for most of us Daylight Saving ends and we gain an extra hour....( and just a reminder not to let anyone fool you on Sunday haha!!)...we hope to make good use of the extra hour travelling to Geelong for the market which is usually pumping and with any luck this week will be no exception:-))

Posted by vintageandart at 8:07 PM
Email ThisBlogThis!Share to TwitterShare to FacebookShare to Pinterest