At the risk of sounding like an episode of Game Of Thrones:-).....Winter officially begins here tomorrow and the days are now short and brisk, the fallen leaves have finished driving us crazy in the garden for another year and though we're not quite into it's full chilly grip yet....it's COMING, so l've been happy doing most things INSIDE lately, in the WARM, over the phone.....and l've been on the phone a LOT, especially to my daughter who lives interstate as she and her partner have just signed on their first home.
They're THAT excited and we're hugely happy for them, though we're wishing we lived closer so we could help them shift all their gear and also with a few projects they have planned for the house. We'll fly up and visit some time after they move in and TRY and make ourselves useful in the time we have there:-)
Then our son has decided to SELL his house now he's also moved interstate, and l've been organising a few things so l can make that happen, since he's just not able too. Of course Mum's house is also on the market so l'm starting to feel a bit like a fledgling property developer:-) 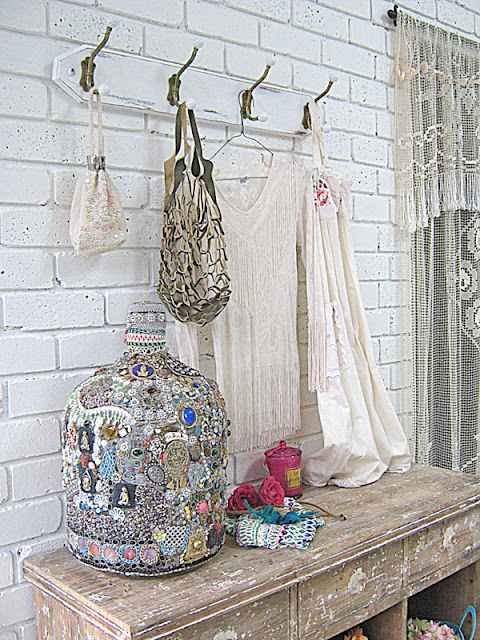 l LOVE finding the time to make a big MESS so l can take some pretty photos, hubby came home early the other day to find me shifting cupboards and side tables and all the stuff IN them and ON them so l could take these pics....He's used to it by now and just shakes his head and tells me l've LOST it....hmmm maybe:-) anyway, this post l wanted to share the coat rack l found recently....BROWN originally, but of course it got the white paint treatment:-) It was a PAIN taking out and putting back the millions (felt like it:-) of screws (manual screwdriver) holding the hooks on, but l knew it'd be easier and make for a better finish in the long run. 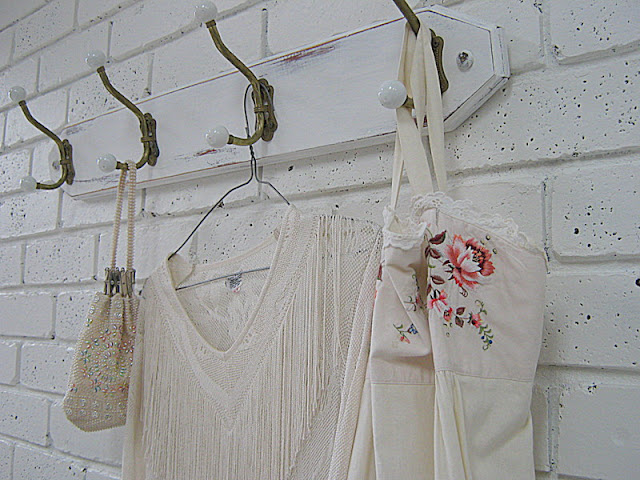 l haven't actually ATTACHED the rack to the brick wall....l put picture hooks in the back and used wire to hang it, exactly like you would a painting, so it can be moved around the house at whim, and it's still solid and stable enough to hang most things from. 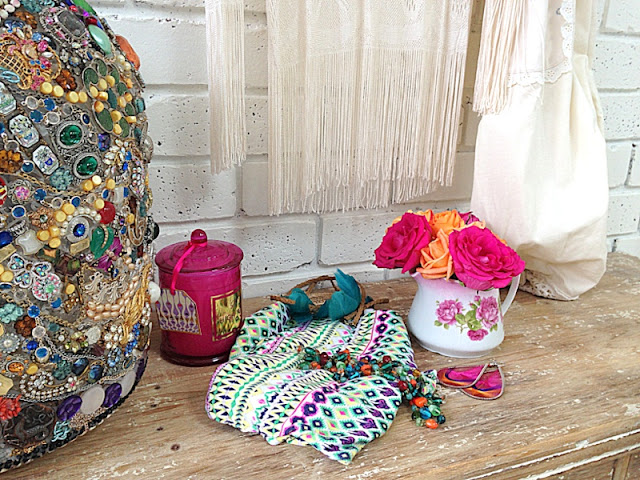 This is (half) a close up of the bottle that was once Mum's.....she found it at our local Sunday market, it was one of her most PRIZED finds....  Thanks to Sis and my brother for allowing it to come home and do it's dazzling here.... 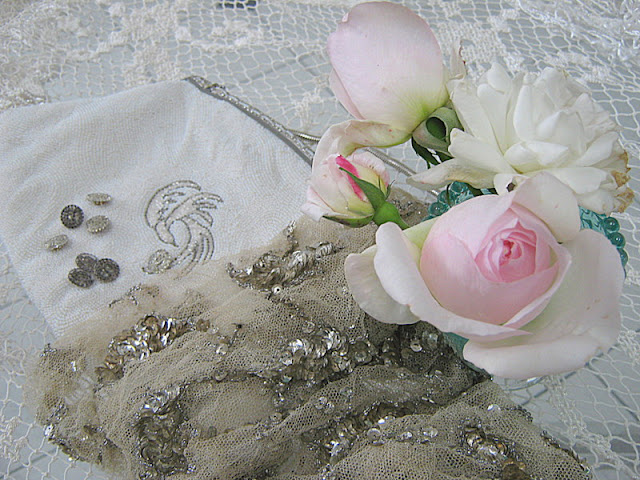 Sometimes you arrive at a garage sale and you're thinking....why even bother getting out of the car, there's not one interesting thing, there'll be nothing amongst that shit stuff....but OUT you get anyway, cos maybe.... just MAYBE, there'll be hidden treasure....so it was amongst dusty office furniture, air conditioning pipes and other such dross that l spotted a half opened suitcase, and poking out of that suitcase were plastic bags, and inside those plastic bags l found a wee bit of TREASURE....including the sequinned lace above, (so fragile l don't even know if it can be used) Victorian lace gloves and collar, beaded crochet work, gloves from the 50's and trims of gold, silver and lace....so GLAD l got out!! 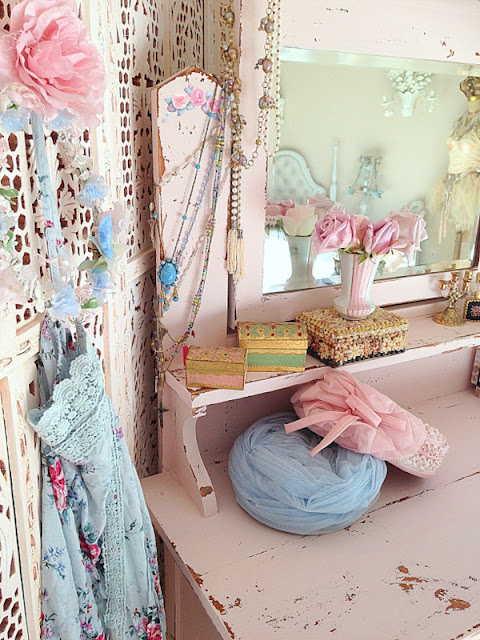 l'm about to sell off most of my hat collection so took some photos just in case l one day have hat regret:-) 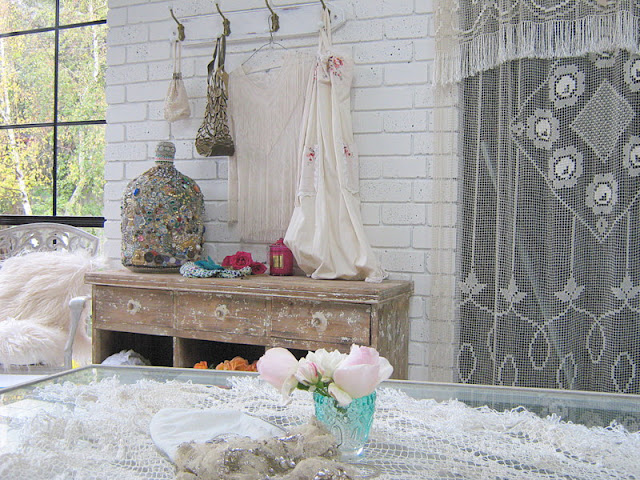 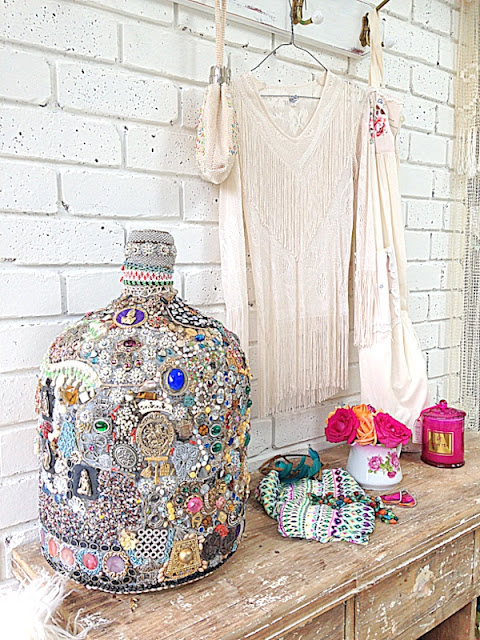 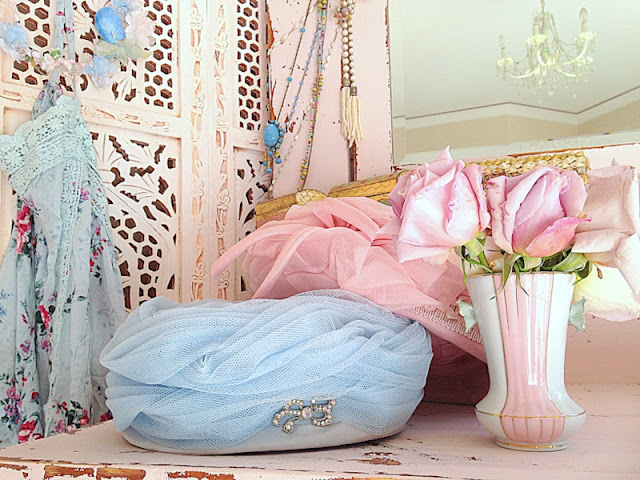 Hope you all have the best week ever whatever you're up to, and that the sun is shining wherever you are and topping up the old vitamin D stores after your long Winter....haha...thanks so much for stopping by and for your lovely comments.

Posted by vintageandart at 9:37 AM
Email ThisBlogThis!Share to TwitterShare to FacebookShare to Pinterest