l know some people totally freak when they see a spider but generally l'm not one of them. l'll pop them onto a piece of paper (or for the really bigguns) a broom and take them outside. If it's a white tail...(for those of you outside Oz..think nasty flesh eating bite) well lets just say....l'll dispose of them. So when l brought the junk mail in the other day neither l (or he) was expecting THIS reaction.....l opened out the leaflets and even as my throat constricted, l could see it was only a huntsman and YES he was HUGE and HAIRY and sooo in my FACE, but l knew he wouldn't hurt me.....however that SCREAM was unstoppable and gawd it was LOUD...to add to the overeacting l also staggered backwards from the chair, across the tiles and into the wall, (pathetic aren't l) by the time l'd recovered (a few seconds?) later  the spider had disappeared.....l searched and searched for him but he was nowhere....l wonder if  l VAPORISED him!!! 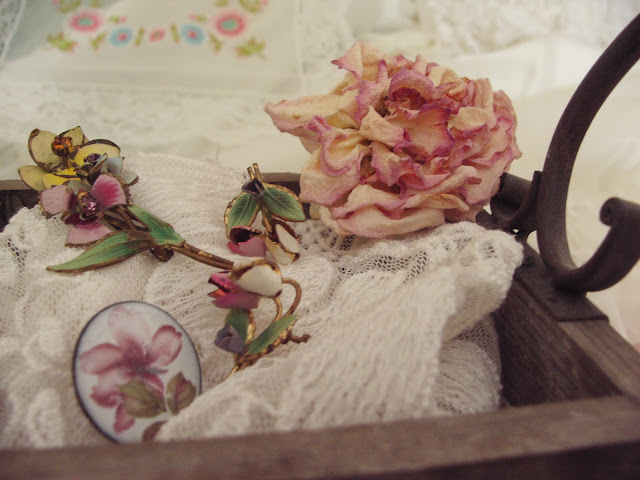 Then this......when l went to start taking these pics for some reason my camera wouldn't work. l tried turning it off and back on again (jolly good advice from the I.T. Crowd hehe :-)) l recharged the batteries but nuh...then recharged TWO other sets of batteries (thinkin' l had a bodgy lot) but still nuh.....﻿what could be wrong with it??? 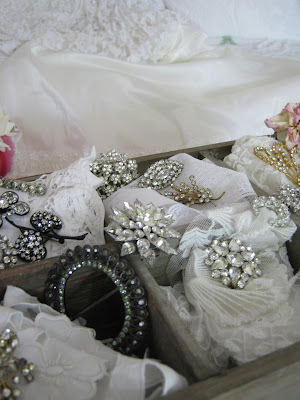 In desperation l pulled out my old camera. It's got so many buttons and dials l've barely used it....l kept playing with the settings so that's why all the pics have different light. Afterwards l got to thinkin'....l opened the battery compartment and held it to the light and peered in. It looked like something was stuck to a terminal so l attacked it with a pair of long tweezers.....and out nose dived a dead MOTH.... WHEW problem solved.

PS That compartment has NEVER been left open!!! 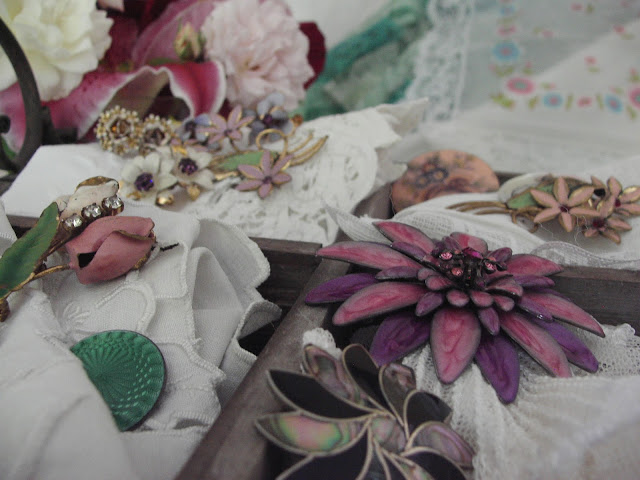 Anyway l thought you might enjoy seeing some of the sparkles l've salvaged over the years. 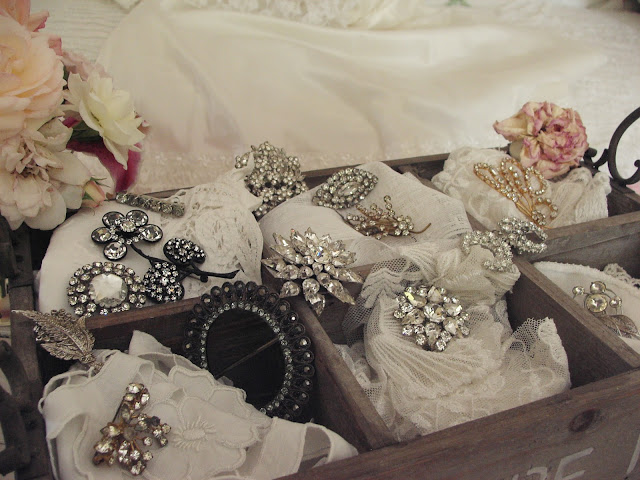 Lots of paste rhinestones....brooches, buckles and earrings mostly from the 40's and 50's. Mostly unmarked but the star brooch is a Simpson which was an Australian company, l hear they're a bit collectible these days.﻿ 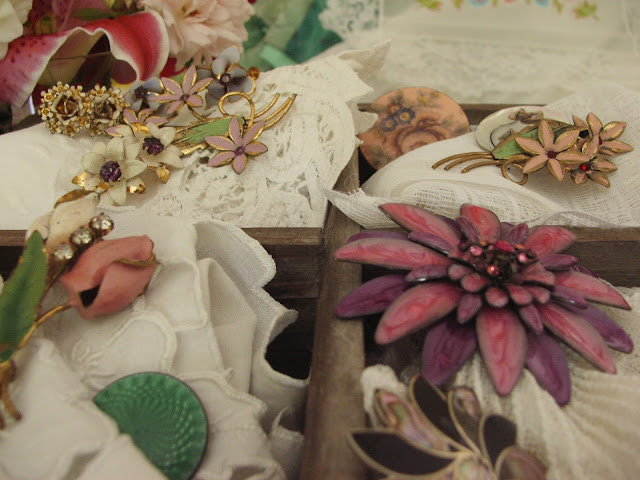 Some of my enamel collection...the round green one is English from the 20's. The floral spray brooches are mostl likely 50's. The pink daisy is much later.﻿ Some of my micro mosaic and petite point pieces from a previous post.﻿You can see and read a little about its history here. 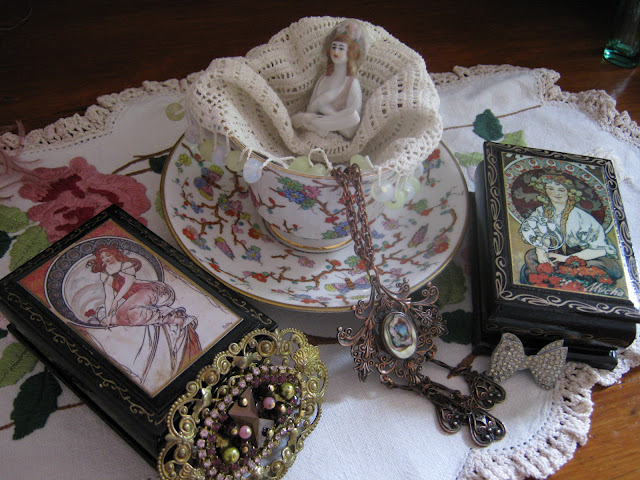 The brooch ( left) is newish however the pendant looks art nouveu to me... which would make it from around 1900.﻿ l think it's made from copper and the stone is abalone shell. 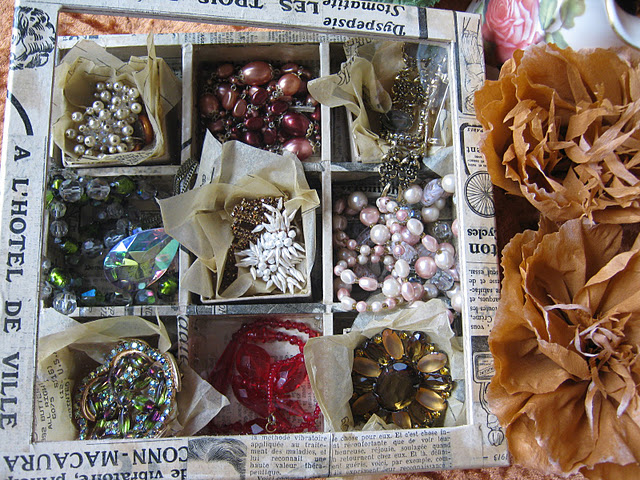 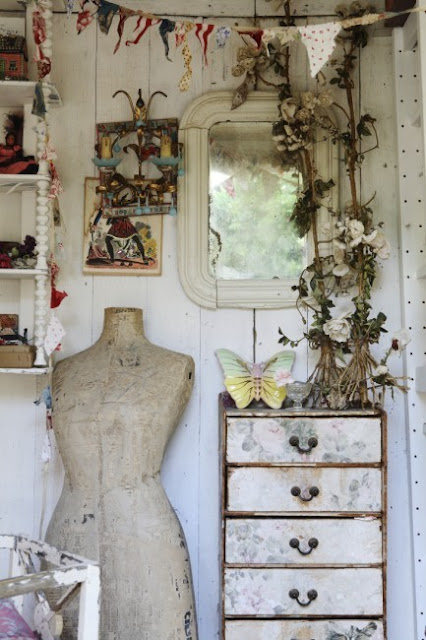 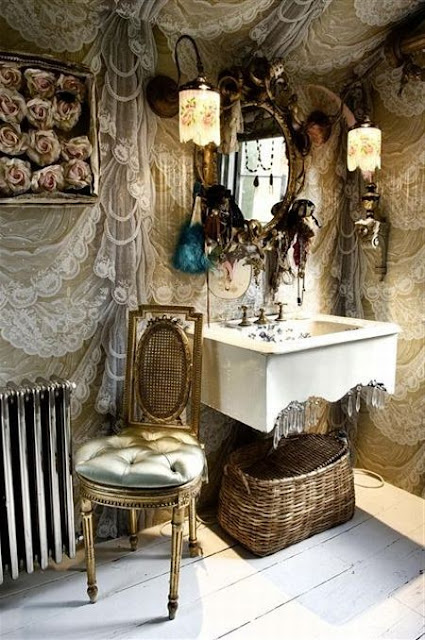 Saved the best for last. r-o-o-m-s.tumblr.com via pinterest.... Awesome bathroom...what about those lace walls.

PS Thought you might like to know the huntsman turned up on the ceiling a few hours later, l put him on the broom and took him outside....not a sound out of me....l PROMISE.

Well l've had fun and l hope you have too....thanks heaps for stopping by.


Bron.
Posted by vintageandart at 1:54 PM
Email ThisBlogThis!Share to TwitterShare to FacebookShare to Pinterest