Almost another month over and the kids are on holidays again, the year's hurtling by and l guess before we know it the Christmas posts will be going up.
As l was finding the tins for todays' post l was thinking about the many tins we had in our house as l was growing up, and how they held the stuff of life.
The tins we had were mostly inherited down through the family, however if we ever recieved a tin of biccies or choccies, the tins were never thrown away, but absorbed into cupboards and filled in no time....generally with some foodstuff or other. 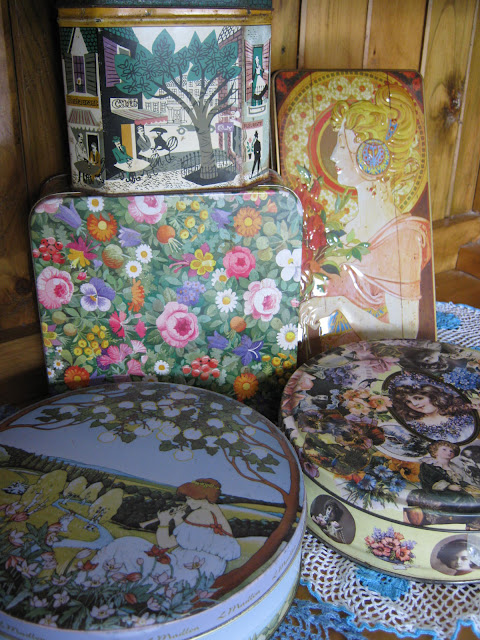 Our kitchen mantle held a set of 70's floral tin canisters, (before then they were bakelite), they held the flour, sugar, rice and tea and were used daily. Though my Mum has moved house since then, the canisters still remain in use on her mantle. Another of these old tins we called the junk tin which held all the items that no-one knew what to do with, but didn't want to throw out. About a year ago Mum and l were looking for something and she pulled out this old tin. l was amazed to see many of the things still there from when us kids were in Primary school. There were keys from our old bike locks, or school lockers, knucklebones, assorted broken jewellery... including an old anodised kissin' cousins locket, my brothers marbles (l knew he lost them somewhere... haha!!), and many other bits and bobs, it was a real blast from the past. 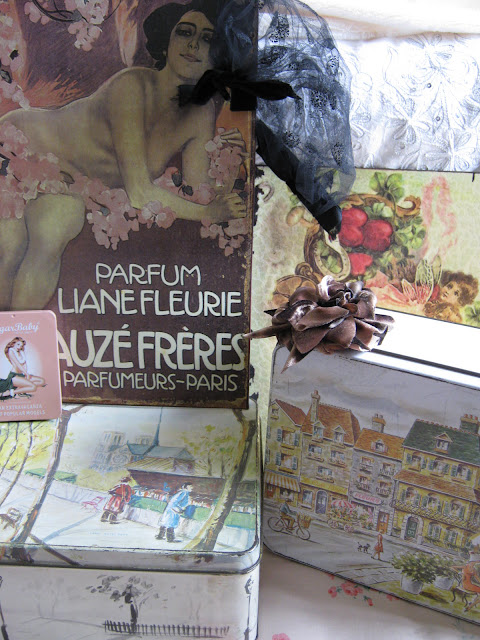 My favourite tin of all was the OLD photo tin, (there were a few photo tins) but this one contained all the photos from my Mums childhood... Her Uncles in their army gear heading off to the first world war, her Grandmothers' and her Mum (who'd died) and her Sisters, there were pictures of horse and carts, the farmdogs whose names Mum could reel off for us, but the best pics were her wedding photos which were sepia negatives wrapped in black paper still waiting to be developed, we were NEVER allowed to open that packet... but once in a (long) while she would open it and give us a quick peek inside, it was wonderful to get a look at how young and swish her and dad looked on their big day. To this day she's only ever had the one taken off as by the time finances were flush enough to do them, all but one had faded into oblivion. 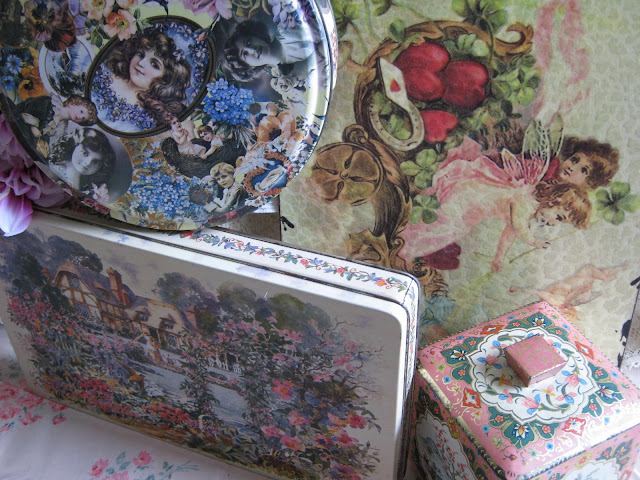 l used to have quite a large collection of tins, but sold off or gave away all but my favourites, a few of which you may have seen in previous posts. Most of them arn't vintage but have beautiful pictures on them, and are so useful for buttons,biros, cards and beads and the like. 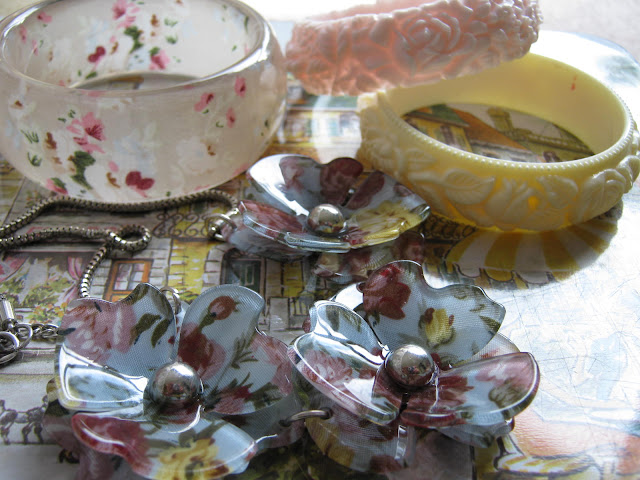 On a recent opshop visit l found this acrylic necklace which was part of a selection of new jewellery on the counter. Since l love plastic jewellery l couldn't pass up this necklace even though it cost a pretty steep $15.00. The kinda matching bangle in the background was a recent (fantastic) gift from a friend. They are shown with a couple of my vintage moulded plastic bangles.﻿ At trash a few weeks ago there was a lady selling off her old jewellery, she had quite a few pairs of earrings in her tins and these are the ones l picked out. They are fifties with the exception of the coloured diamentes in the background which judging by the clips... may be older.﻿ There are a couple of stones missing in one pair but meh... 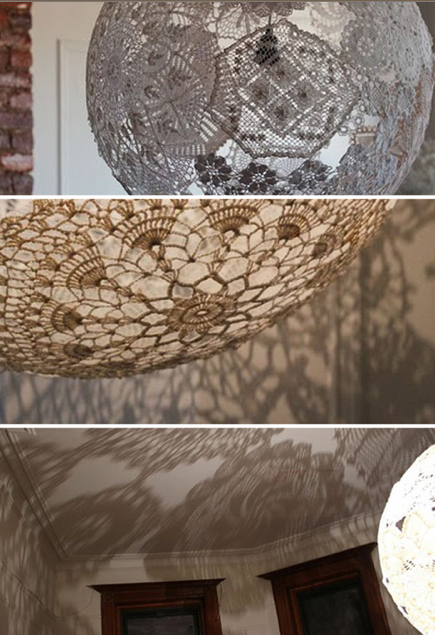 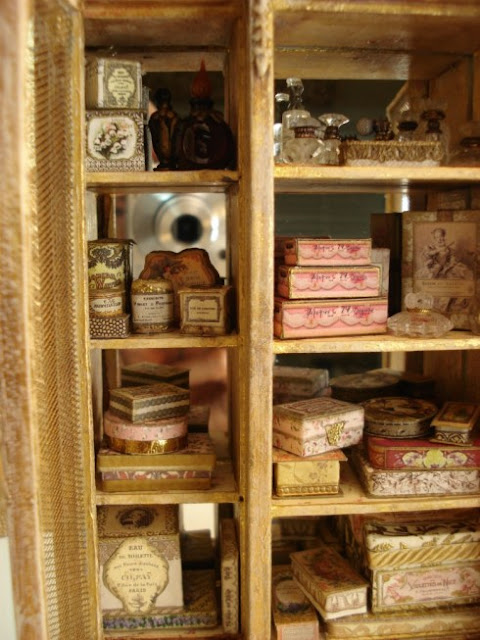 ﻿
Gorgeous product packaging so neatly organised its cabinet.﻿
heirloomsbysusan via the paris apartment. 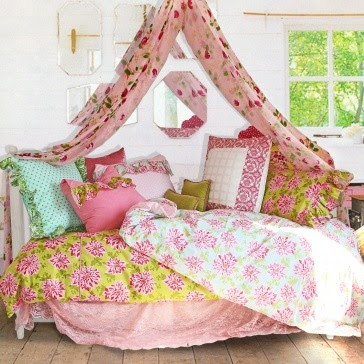 Who'd have thought mismatched bedlinen could look so good. wakeupfrankie. via pinterest.﻿ 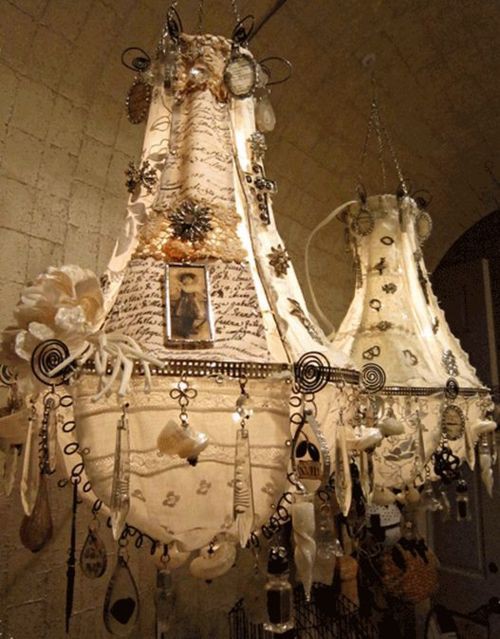 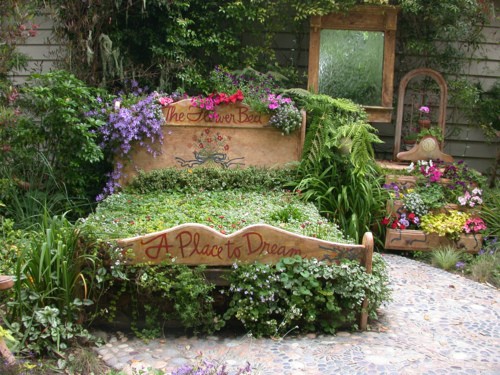 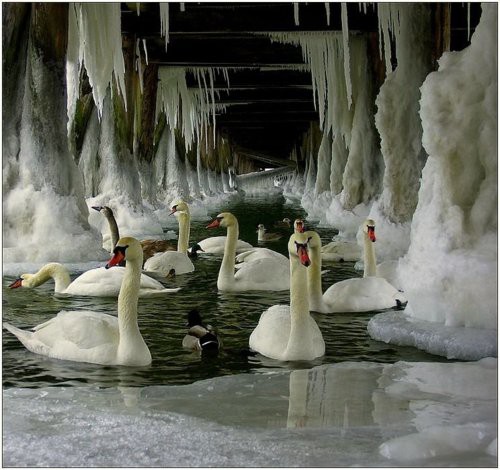 Hope you've enjoyed the trip down memory lane today. Thanks for stopping by.

Til next time,
Bron.
Posted by vintageandart at 9:18 AM
Email ThisBlogThis!Share to TwitterShare to FacebookShare to Pinterest