Since this is a blog about vintage and art l was thinking it might be nice every now and then to feature a favourite artist, much like the post l did on Monet, not that l want to go on (and on) so as to  bore you to distraction, but just introduce some  art you might find interesting and inspiring, that you might not otherwise know about.

Today l've chosen Kaffe Fassett who some of you may be familiar with. He is  an American born artist who now lives and works in the UK, he settled there in 1964. What l love about Kaffe's work is his stellar understanding, knowledge and use of colour, as well as his passion and vision for creating beautiful works of art. 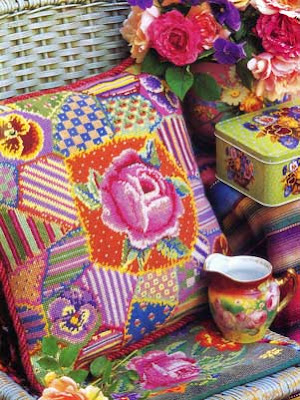 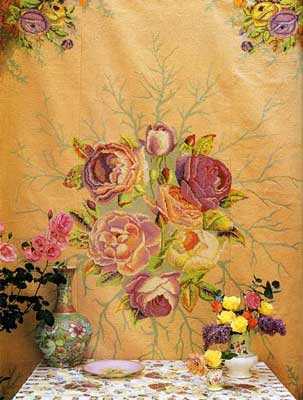 Kaffe began his creative life as a painter and at age 19 won a scholarship to the Museum of Fine Art in Boston, but after 3 months he went to England to paint. On a trip to Scotland he visited a Woollen Mill and loved that the yarns were available in the colours of the landscape that was so inspiring to him. He bought 20 balls of Shetland wool and a pair of knitting needles. On the way back to London on the train, some kindly passenger taught him to knit...his very first design ended up as a full page spread in Vogue knitting magazine. He has written over 30 books, many of them on arty designer knitwear, as well as patchwork quilts, tapestries and mosaics. 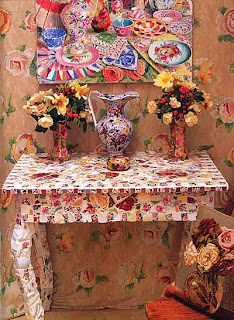 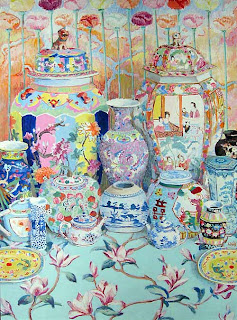 ﻿Above is one of Kaffes' mosaics and he has been commissioned for many projects, including items that were part of a gold medal award winning garden at the Chelsea Flower and Garden show in London. He trawls markets, car boot sales, and op shops searching for china to use in his work. He loves to use items that have been discarded, and undervalued, the more kitsch the better.
﻿ 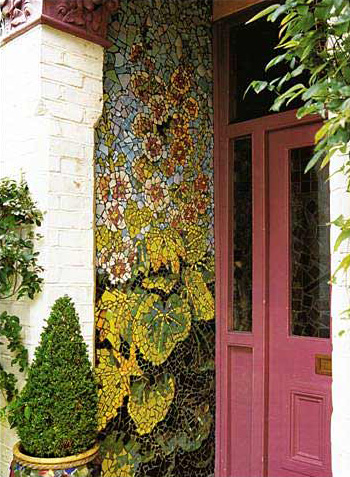 I love the detail in this mosaic at the front of Kaffe's studio. 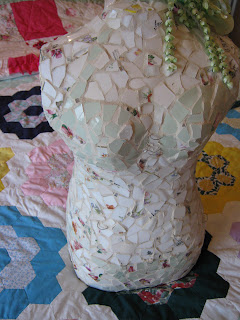 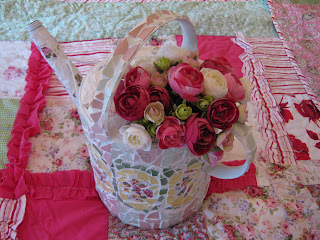 Above is a couple of my experiments in mosaic. The torso is one l bought that's made out of cardboard, l was surprised at how sturdy it was to hold all that glue, china and grout, though it was completed quite a few years ago it's still holding up ok. If you look closely you might notice the green bikini. It sits on a vintage quilt l bought from trash & tresh which is made from individually hand stitched hexagons... Whew!! what a lot of work.
The pic on the right shows a quilt l did make from both vintage and new fabrics, it's just a very simple example with large patches, but l really enjoyed putting together the colour combinations. It wasn't professionly quilted (way too exy for such basic work) but hand quilted during the Winter months which actually made it quite enjoyable. 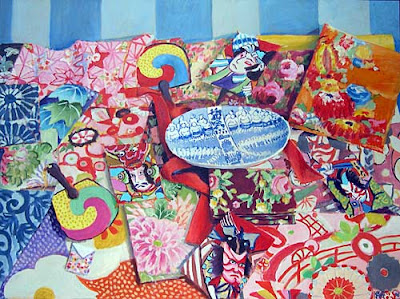 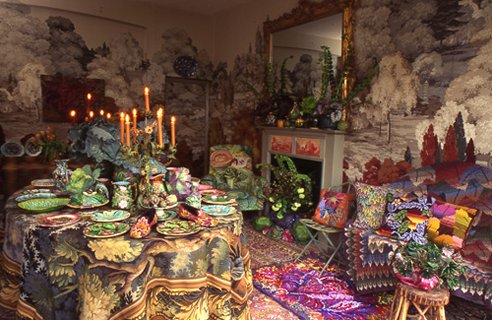 The above image is the dining room in Kaffes' home, and is featured in his book Welcome Home, which shows all the rooms of his home as well as his studio. 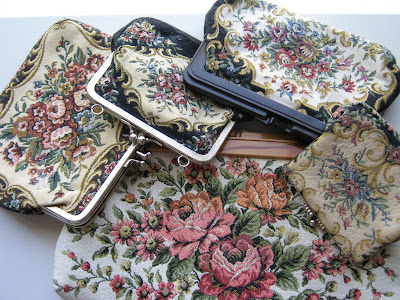 Part of a collection of tapestry bags l've collected over many years..... love the intricate, detailed pattern and design. 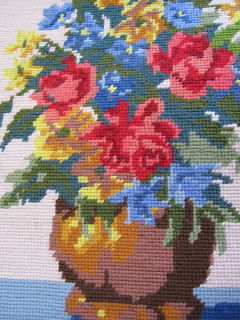 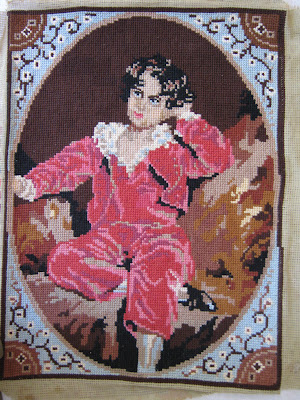 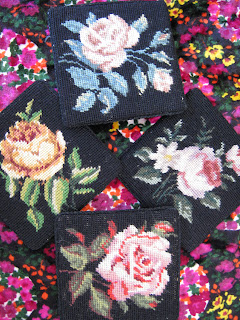 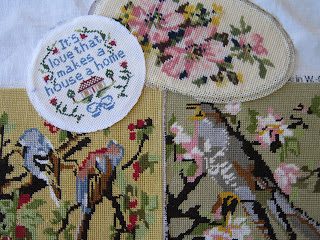 These are just some of the woolwork tapestries l've collected over the years, l buy them because they're so pretty, usually cost effective, but mostly it just seems wrong that they might be thrown in the bin if not sold. All that time, work and attention surely deserves to be utilised. l hope to eventually turn them into cushions or bags to give them a new lease of life.
l generally take the works out of their frames so they can be stored more compactly. 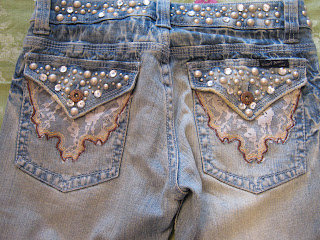 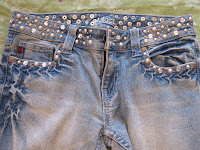 When a shift at work was cancelled earlier this week it was a bit of a blow, but if l'd worked l wouldn't have found these jeans at the op shop, l couldn't believe my luck when they actually fit and only $4.50. They're encrusted with diamentes & studs and since l'm such a sucker for a bit of bling l was completely smitten. Do you think l'll look like mutton done up as Dolly Parton? l should be so lucky...... (though Lord knows l can't sing).They're very long so can't wear 'em til they're taken up, otherwise l'd be wearing them right now. Oh and they have a flarish/ bootleg bottom which isn't shown in the pic.
Hope you've enjoyed exploring a little of Kaffe's fascinating life and work. You can read and see lots more at kaffefassett.com . The info and pics are from his website. Hope it's not too wicked to share them with you all. l'll find out soon enough l guess......
Thanks so much for taking time out of your busy day to visit, til next time,
Bron.
Posted by vintageandart at 2:36 PM
Email ThisBlogThis!Share to TwitterShare to FacebookShare to Pinterest